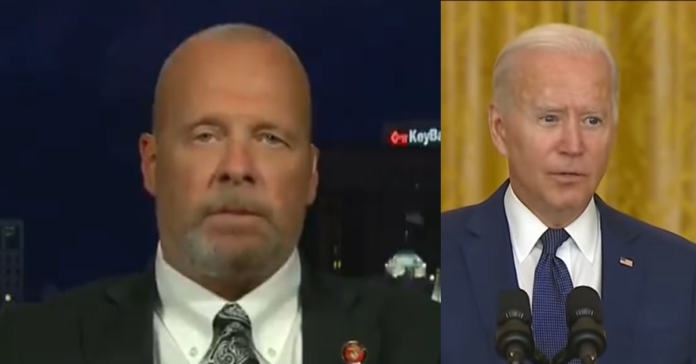 Darin Hoover, father of Utah Marine Darin Taylor Hoover Jr. went on Fox News Monday night and dropped the hammer on Joe Biden. Hoover said he couldn’t meet with Biden and as a family, they decided to keep their distance from the bungling commander in chief.

But he said what he saw of Biden made him angry and he knew he made the right choice to stiff Biden. He brought up the now viral image of Biden checking his watch at the sacred ceremony in Dover

“As a father, seeing that and the disrespect, and hearing from his former leaders, one of Taylor’s master sergeants said that this was avoidable — that they left them over there. They had them over there and let them down, and we can’t have that. It can’t happen ever again,” he said.

“We said absolutely not. We didn’t want to deal with him, we didn’t want him anywhere near us. We as a family decided that that was the way it was going to be.”

Hannity asked Mark Schmitz, father of Missouri Marine Jared Schmitz, if he saw the same disrespectful manner in which Biden handled the ceremony.

“I leaned into my son’s mother’s ear and I said ‘I swear to God if he checks his watch one more time’ — and that was probably only four times in.

“I couldn’t look at him anymore after that.

“Considering the time and why we were there, I found it to be the most disrespectful thing I’d ever seen.”

“I actually leaned into my son’s mother’s ear and said ‘I swear to God, if he checks his watch one more time…’ I found it to be the most disrespectful thing I’ve ever seen.” pic.twitter.com/VG9BafFFzn

“I actually leaned into my son’s mother’s ear and said ‘I swear to God, if he checks his watch one more time…’ I found it to be the most disrespectful thing…”

In what f***ing world was it a good idea to just hand over a country to these people. https://t.co/fyO2fnxmfz

Gold Star Father Rips Joe Biden After Dover Meeting: "He talked a bit more about his own son than he did my son, and that didn't sit well with me"

Biden's Pentagon Clown Flippantly Says "There's Heartbreak, Sure"... “We Have Americans That Get Stranded In Countries All The Time”