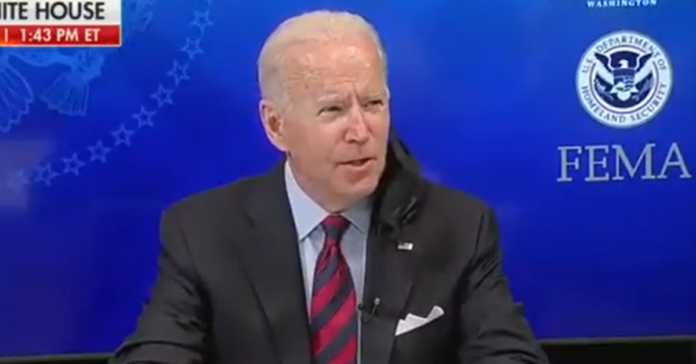 President Joe Biden stepped in it again and one has to wonder if he will he have any support left by the midterms if he keeps going at this pace. Biden has bungled multiple crises with no end in sight. Biden has been shaky, flubbing darn near every big public appearance and the FEMA meeting about Hurricane Ida was more of the same.

But this time he called his senior adviser, who just happens to be African American, ‘boy.’ That word has a very negative connotation so this one will come back to haunt Biden and the Dems. Can you imagine if Trump or anyone on the right said this about an African American adviser?

“Cedric Richmond is a 47-year-old man.

“While Ja’Ron Smith was 38 years old when he was in a similar role for President Trump I can assure you he was not called a “boy” by President Trump.

“Joe Biden just continues to insult Black men openly and in public because he doesn’t care.”

The president of Entergy said more than 2,000 miles of transmission lines are out of service across Louisiana in the aftermath of Hurricane Ida.

“There are eight transmission lines that feed power to the city of New Orleans that have sustained damage,” Deanna Rodriguez, president and CEO of Entergy New Orleans, said Monday.

“The catastrophic damage of the storm that hung over west of here, caused a lot of damage to the transmission lines that feed New Orleans,” Rodriguez said.

There are 4,500 boots on the ground in New Orleans doing damage assessment, she said. Rodriguez declined to say when power will be restored.

Not only does Biden not sound great here, but also called Cedric Richmond “boy,” something the left would lose it if he were a Republican: “I’m here with — with my senior adviser and boy who knows Louisiana very, very well — man — and — and New Orleans, Cedric Richmond.” pic.twitter.com/T11qNAGJhu

The U.S. Knew in Advance of Impending Kabul Attack But Kept Gate Open Where 13 Americans Were Killed [Video]