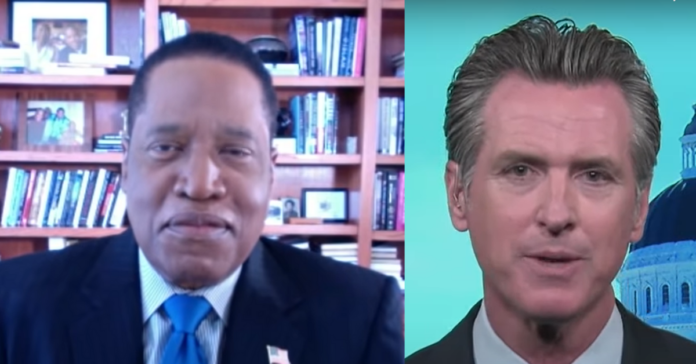 She said: “Our public schools need big change. I’m Gloria Romero; I was the majority leader of Democrats in the state senate. I believe in charter schools and school choice. So does Larry Elder – but not Gavin Newsom.

“He shut our public schools while he sent his kids to private schools” said Romero in a new campaign video ad for Elder. Yes. I’m a Democrat. But the recall of Newsom is not about political party.

“School choice means the money follows the child rather than the other way around. A quality education is the first step into the middle class.”

The Dem machine is terrified and mobilizing. From The Hill:

Sen. Bernie Sanders (I-Vt.) cut an ad for California Gov. Gavin Newsom (D) ahead of the Sept. 14 recall vote that will decide his future in public office.

“At this unprecedented moment in American history, when we’re trying to address the crisis of climate change, guarantee health care for all and pass real immigration reform, the last thing we need is to have some right-wing Republican governor in California,” Sanders says in the 30-second ad spot.

“The Sept. 14 recall of Gov. Newsom is a bold-faced Republican power grab,” he continues. “Don’t let it happen.”

Major Hollywood figures have teamed up to bankroll the effort to prevent the recall aiming to oust California Gov. Gavin Newsom next month.

Executives, directors, producers and actors have opened their pocketbooks to protect Newsom, who faces a recall on Sept. 14. Netflix CEO Reed Hastings has contributed a whopping $3 million to the political action committee defending Newsom, according to the California Secretary of State’s Office.

The Entertainment Software Association contributed $50,000, while Paramount Pictures gave $40,000 and the Motion Picture Association spent $10,000 on the effort.

The singer/songwriter John Roger Stephens, known as John Legend, urged Californians to vote against the recall.

Taliban Offered To Stay Out Of Kabul and Let US Forces Control City…U.S. Opted To Only Control Airport