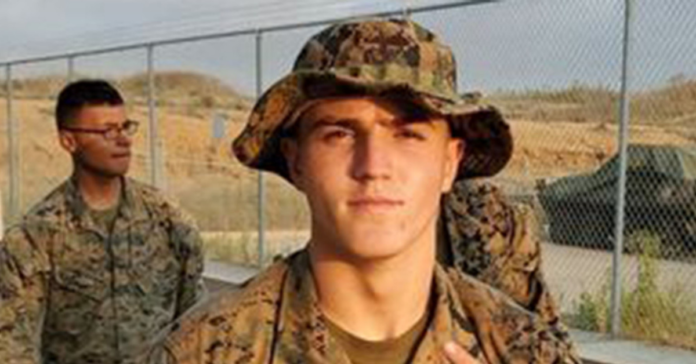 Kathy McCollum, the mother of 20-year old slain Marine Rylee McCollum, called in to a local radio station and called out President Joe Biden for the tragic debacle in Afghanistan.

“Twenty years and six months old. Getting ready to come home from freaking Jordan to be with his wife. To watch the birth of his son. And that feckless, dementia-ridden piece of crap just sent my son to die. I woke up at 4 o’clock this morning to Marines at my door telling me my son was dead.

“So, my son is gone. And I just want all you Democrats who voted for him, you just killed my son with a dementia ridden piece of crap who doesn’t even know he’s in the White House.”

Roice McCollum, the older sister of US Marine Rylee McCollum, told CNN her brother, who was 20 years old, was “an amazing man with a passion for the Marines.”

He was a lance corporal, she added.

“He was a son, a brother, a husband and a father with a baby due in just 3 weeks,” she told CNN in a statement, adding that Rylee had wanted to be a Marine his whole life, so much so that even as a toddler he carried around a toy rifle in his diapers and cowboy boots.

Roice said that her brother, a native of Wyoming, was on his first deployment and had been determined to be infantry. He was sent to Afghanistan when the evacuation began and had been manning the check point when the suicide bomb went off, she said.

“Rylee wanted to be a history teacher and a wrestling coach when he finished serving his country,” she said. “Rylee will always be a hero, not just for the ultimate sacrifice he made for our country but for the way he impacted every life around him for the better. Making us stronger, kinder, teaching us to love deeper. We love you Rylee.”

He was tough but a kind and loving person that “made an impact on everyone he met,” his sister said.

Audio Kathy McCollum, mother of Rylee McCollum (Marine)killed in #Kabul attack
My son is gone I just want all you Democrats who cheated in election or who voted for him legitimately, you just killed my son with a dementia ridden piece of crap who doesn’t even know he’s in the WH pic.twitter.com/SI6d4eUZ8n

There are two gofundme pages set up for the family: