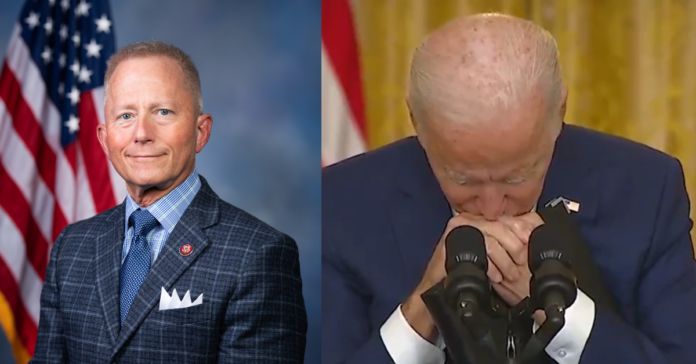 Rep. Jeff Van Drew (R-NJ) ripped President Joe Biden for the debacle in Kabul calling Joe “cognitively impaired” in the process. He said: “I am so tired of being disgusted with what is going on in our country in general, but with this administration, with this Congress, it’s been mistake after mistake.

“There’s nothing at all in what they do that reminds me of American exceptionalism or Americanism, and the same here. The America I know is strong and powerful and brave, courageous and smart.

“Right from the beginning, literally, you could have a number of cadets that are studying a little bit about military warfare put together a better exit plan.

“Evacuate your men and women, Americans first, Afghanis next — the Afghanis that were loyal to us and work with us. And then, you would make sure you destroy all of our equipment that was there — some of it very advanced, such as our Blackhawks.

“They have more Blackhawks now than most countries do in the world.

“And then finally, drawdown the troops. That’s not really complicated. That basically is military 101 and they couldn’t even do that right.

“We are leaving some of the most powerful military equipment in the world over there. The Chinese are already reverse engineering this equipment.

“Just how stupid can we be? How off the mark can we be?

“I’ve already asked the president to resign in the past number of days, as well as the vice president, and some of the leaders in the party.

“Of course I know he’s not going to, but I want to make it clear how I and many many Americans feel.

He said he asked Biden to undergo a cognitive test “because either this president is cognitively impaired or he’s purposely harming the country, or both.”

“This is just something like we’ve never really seen before,” he continued.

“For a United States general to say that we are relying upon the Taliban to shepherd us, to keep us safe, to be strong for us made me sick and it makes me sick for the very brave men and women who died or were injured.”

He then dropped the hammer on Biden’s arrogant team saying:

“How could one group mess up so much so quickly?

“Nobody would ever think it could happen so fast. It was a perfect storm of stuff and, quite frankly, even those of us that were worried about a lot of these things,” he said.

One of the last Instagram posts from fallen Marine Sgt. Nicole Gee in Kabul, who was killed in the suicide blast. She’s holding a rescued infant.

I can’t stop thinking about how young they were. The majority not older than 25; the oldest named here just 31. Completely heartbroken for these families. https://t.co/looWg3E3Od

Rick Newman "Last week was the worst moment of Joe Biden’s presidency—until this week, which was worse."