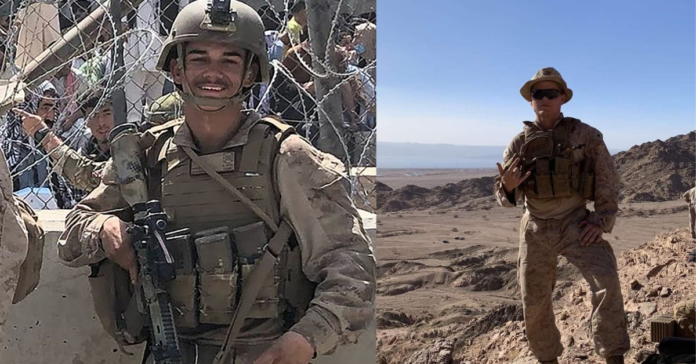 The fathers of two Marines who gave the ultimate sacrifice for their country broke their silence and put the blame for the tragedy on Joe Biden and the military leaders who bungled the operation.

Mark Schmitz father of 20-year-old Lance Corporal Jared Schmitz who was killed in Kabul said: “His life meant so much more. I’m so incredibly devastated that I won’t be able to see the man that he was very quickly growing into becoming.
“Be afraid of our leadership or lack thereof. Pray every day for the soldiers that are putting their lives at risk, doing what they love which is protecting all of us.”

Kareem Nikoui’s heartbroken father said: “I haven’t gone to bed all night. I’m still in shock. I haven’t been able to grasp everything that’s going on. He really loved that [Marine Corps] family. He was devoted — he was going to make a career out of this, and he wanted to go. No hesitation for him to be called to duty.

“They sent my son over there as a paper pusher and then had the Taliban outside providing security,” Steve Nikoui said. I blame my own military leaders… Biden turned his back on him. That’s it.”

David Lee Espinoza was a 20-year-old Marine from Laredo, Texas.“Our thoughts and prayers will remain with the family of United States Fallen Marine, David L. Espinoza, as well as to his friends and fellow Marines,” the Laredo police wrote in a Facebook post alongside a photo of Espinoza.“Semper Fi. Thank you for your service.”

“Mr. Espinoza, a Laredo Marine killed in Afghanistan, embodied the values of America: grit, dedication, service, and valor. When he joined the military after high school, he did so with the intention of protecting our nation and demonstrating his selfless acts of service,” Rep. Henry Cuellar (D-Texas) said.

“I mourn him and all the fallen heroes in Afghanistan. My heart goes out to the Espinoza family in this extremely difficult time. The brave never die. Mr. Espinoza is a hero.”

The danger is far from over for our soldiers too. From The Hill:

“U.S. citizens who are at the Abbey gate, East gate, North gate or the New Ministry of Interior gate now should leave immediately,” the embassy said in the alert posted late Friday.

The alert added, “Because of security threats at the Kabul airport, we continue to advise U.S. citizens to avoid traveling to the airport and to avoid airport gates.”

“As a general rule, we don’t speak to intelligence, but this is a dynamic and volatile security situation on the ground,” a State Department spokesperson told The Hill in an email Saturday, urging Americans to refer to the embassy’s website for updates and any further alerts.

Rylee McCollum, a Marine from Bondurant, Wyoming, was on his first deployment and was just three weeks away from being a dad.

“He wanted to be a Marine his whole life and carried around his rifle in his diapers and cowboy boots,” McCollum’s sister Roice McCollum said.

“He was determined to be in infantry. Rylee wanted to be a history teacher and a wrestling coach when he finished serving his country. He’s a tough, kind, loving kid who made an impact on everyone he met. His joke and wit brought so much joy.”

“Saying that I am grateful for Rylee’s service to our country does not begin to encapsulate the grief and sadness I feel today as a mother and as an American,” Wyoming Schools Superintendent Jillian Balow said. “My heart and prayers are with Rylee’s family, friends, and the entire Jackson community.”

Wyoming’s Governor Mark Gordon said: “I’m devastated to learn Wyoming lost one of our own in yesterday’s terrorist attack in Kabul,” Gordon wrote.

“Our thoughts and prayers are with the family and friends of Rylee McCollum of Bondurant. Jennie and I, along with all of Wyoming and the entire country thank Rylee for his service.”