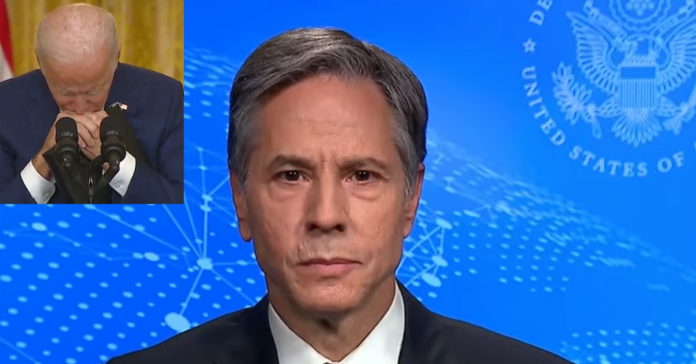 Two House Republicans are introducing articles of impeachment for Secretary of State Antony Blinken over the tragic debacle in Kabul. The move by Rep Ralph Norman, R-S.C., and Rep Andy Harris, R-Md., may have traction as many Dems have been horrified by what they have seen.

“Under the Constitution of the United States of America, the Secretary of State is tasked with informing Congress and American citizens on the conduct of U.S. foreign relations,” said Norman.

“In Afghanistan, he failed to do so, leaving American citizens exposed in a city under the control of the Taliban. Secretary Blinken is also responsible for the safety of American citizens abroad and, in the case of danger, the safe and efficient evacuation of those Americans – which he has not done thus far,” he added.

“Secretary Blinken has failed to faithfully uphold his oath and has instead presided over a reckless abandonment of our nation’s interests, security, and values in his role in the withdrawal of American forces and diplomatic assets from Afghanistan,” the articles read.

“in direct conflict with the intelligence and advice provided by his own diplomats and the intelligence community, Secretary Blinken failed to advise and counsel the President accordingly and did not inform the Congress nor American citizens at home and abroad of the dangers.”

Biden said yesterday: “I bear responsibility for, fundamentally, all that’s happened of late.

“But here’s the deal: You know — I wish you’d one day say these things — you know as well as I do that the former President made a deal with the Taliban that he would get all American forces out of Afghanistan by May 1.

“In return, the commitment was made — and that was a year before — in return, he was given a commitment that the Taliban would continue to attack others, but would not attack any American forces.”

National security officials warned President Biden on Friday that another terrorist attack in Kabul, Afghanistan, is “likely” in the finals days of the U.S. military mission in the country.

Biden and Vice President Harris met with Pentagon officials and members of the president’s national security team one day after a suicide bombing outside the Kabul airport attributed to ISIS killed more than a dozen U.S. service members and dozens of Afghan civilians.

“They advised the president and vice president that another terror attack in Kabul is likely, but that they are taking maximum force protection measures at the Kabul Airport,” White House press secretary Jen Psaki said in a briefing.

“They reported that even in the face of those threats, our courageous service women and men are continuing to operate a historic evacuation operation,” she added. “The U.S. military is airlifting out thousands of people every few hours.”

Secretary Blinken played a vital role in this foreign policy failure and his dereliction of duty deserves nothing less than impeachment. https://t.co/8gqIXfgyKZ

God bless this hero and his family. We are a nation indebted to you for your sacrifice and service. https://t.co/3aZRw0peKU