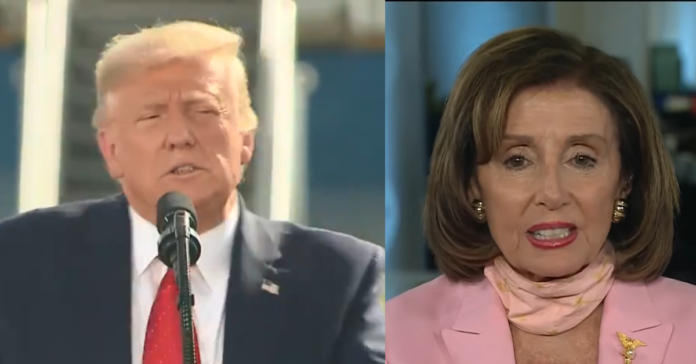 Former President Donald Trump overruled Nancy Pelosi telling her and the rest of the Dems trying to probe his actions around Jan 6 that he will invoke executive privilege to block requests for access to executive branch communications.

The committee which includes Liz Cheney is demanding a lot of documents including information from all of Trump’s children (except Tiffany) surrounding that fateful day. Trump said: “The Leftist “select committee” has further exposed itself as a partisan sham and waste of taxpayer dollars with a request that’s timed to distract Americans from historic and global catastrophes brought on by the failures of Joe Biden and the Democrats.

“Unfortunately, this partisan exercise is being performed at the expense of long-standing legal principles of privilege. Executive privilege will be defended, not just on behalf of my Administration and the Patriots who worked beside me but on behalf of the Office of the President of the United States and the future of our Nation.

“These Democrats only have one tired trick—political theater—and their latest request only reinforces that pathetic reality.”

The House select committee charged with investigating the Jan. 6 attack on the U.S. Capitol has issued a wave of record requests targeting communications by former President Donald Trump and his top officials in the lead-up to the deadly riot.

It marks the most widespread list of demands since the siege, directing letters to eight federal entities, including the National Archives and Records Administration, which is charged with maintaining records for past White House administrations. The demands could be followed by subpoenas.

They target communications by Trump, former Vice President Mike Pence and other top officials as well as White House visitor and call logs related to the day of the attack. Other agencies also included in the wave of requests include the Justice, Defense and Interior departments.

“The Select Committee to Investigate the January 6th Attack on the United States Capitol is examining the facts, circumstances, and causes of the January 6th attack,” Committee Chairman Bennie Thompson, D-Miss., said in a statement announcing the plans.

“Our Constitution provides for a peaceful transfer of power, and this investigation seeks to evaluate threats to that process, identify lessons learned and recommend laws, policies, procedures, rules, or regulations necessary to protect our republic in the future.”

“The Leftist “select committee” has further exposed itself as a partisan sham and waste of taxpayer dollars with a request that’s timed to distract Americans from historic and global catastrophes brought on by the failures of Joe Biden and the Democrats. pic.twitter.com/syRSo6GQ8j

Among the voluminous requests, the committee is seeking 9 months worth of contacts between the Trump WH and this group of outsiders, including Enrique Tarrio, George Papadopoulos and Jack Posobiec. pic.twitter.com/xC2nEWbJBP

Jack Posobiec is a reporter who has been reporting a lot of news that’s embarrassing for the Biden White House (and democrats in general). https://t.co/LTEswgrrBr

What Biden SHOULD Have Done...Navy SEAL Delivers Epic Rallying Cry on Rescuing Stranded Americans in Afghanistan

Greg Kelly, calls for military overhaul, says "The culture has been corrupted - possibly because the Pentagon is so close to the swamp."