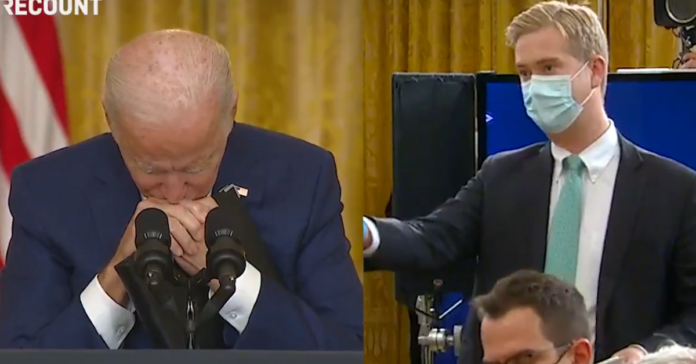 In a weird and rather alarming press conference, President Joe Biden somehow made the tragedy in Kabul worse with an incoherent, argumentative press conference. Not many who saw it came away with confidence in Joe.

Biden answered, “I bear responsibility for fundamentally all that’s happened of late, but here is the deal. You know, I wish you would one day say these things, you know as well as I do that the former president made a deal with the Taliban that he would get all American forces out of Afghanistan by May 1.

“In return, the commitment was made — and that was a year before. In return, he was given a commitment that the Taliban would continue to attack others but would not attack.”

Doocy fired back not buying what Joe was selling and Biden bowed his head like he was taking a nap. Biden then continued:

“I think they have an issue that people are likely to get hurt, some as we’ve seen have gotten killed, and that it is messy.

“The reason why, whether my friend will acknowledge it or has reported it, the reason why there were no attacks on Americans as you said from attacks in America from the date until I came into office was because the commitment was made by President Trump.

“I will be out by May 1st. In the meantime, you agree not to attack any Americans. That was the deal. That’s why no Americans were attacked. “

The Islamic State Khorasan formed in late 2014 and operates as an ISIS affiliate in Afghanistan and Pakistan. Khorasan is a historical term for a region that includes present-day Afghanistan and parts of the Middle East and Central Asia. The group is also known as ISIS-K or IS-K.

The founding members included militants who left both the Afghan Taliban and the Pakistani Taliban.

“ISIS had sent representatives to both Pakistan and Afghanistan. They were essentially able to co-opt some disaffected Pakistani Taliban and a few Afghan Taliban [members] to join their cause,” Seth Jones, an Afghanistan specialist at the Center for Strategic and International Studies, said on NPR’s All Things Considered.

In a 2015 video, the group’s leader at the time, Hafiz Saeed Khan, and other top commanders pledged their allegiance to the Islamic State’s then-leader Abu Bakr al-Baghdadi and declared themselves administrators of a new ISIS territory in Afghanistan.

The regional affiliate governed with a strict interpretation of Islamic law and used violent enforcement tactics, such as carrying out public executions, killing tribal elders and closing schools, according to the Center for International Security and Cooperation at Stanford University.

Khan was killed in 2016 during a U.S. drone attack. Baghdadi died in 2019 after he set off an explosive vest during a raid by U.S. forces.

Biden hangs his head in exasperation during a back-and-forth with Fox News’ Peter Doocy.

Biden turns the question back to Doocy, asking if he remembers the deal Trump made with the Taliban in 2020. pic.twitter.com/mWEd6CDMK7

Peter Doocy asks Biden if he bears responsibility for what’s happened in Afghanistan the last 2 seeks. Biden acknowledges he does, but points out that Trump made a deal with the Taliban that contributed to the chaotic state of affairs there. pic.twitter.com/eo46M8Pmoj

BREAKING: Trump and Melania issue statement on U.S. Service Members who were killed