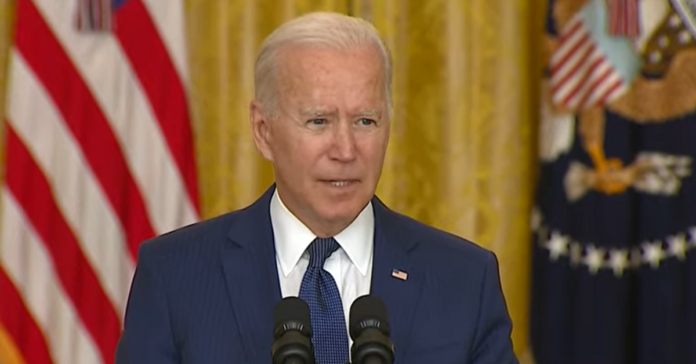 President Joe Biden stepped in front of the microphone to calm a grieving nation and gave a rambling at times incoherent speech that did the opposite. But it was when Biden started taking questions from reporters where he gave up the game.

He said, “They gave me a list here. The first person I was instructed to call on…” Social media erupted in outrage at the staged nature or lack of competence that the White House is showing the world.

Marine Gen. Kenneth McKenzie, commander of U.S. Central Command, said earlier: “We have put more than 5,000 U.S. service members at risk to save as many civilians as we can. It’s a noble mission, and today we have seen firsthand how dangerous that mission is. ISIS will not deter us from accomplishing the mission. I assure you of that.”

“The attack on the Abby gate was followed by a number of ISIS gunmen who opened fire on civilians and military forces,” McKenzie added.

He also indicated the attacks would not alter the ongoing evacuation mission, which as of Thursday was still set to conclude on Aug. 31.

“We continue to focus on the protection of our forces and the evacuees as the evacuation continues. While we’re saddened by the loss of life, both U.S. and Afghan, we’re continuing to execute the mission,” McKenzie said.

President Biden and Vice President Harris have been briefed on the attacks. Biden’s meeting with the Israeli prime minister, scheduled for Thursday afternoon, was postponed as he monitored events in Afghanistan.

Biden was tentatively scheduled to deliver remarks on the situation in Afghanistan at 5 p.m.

The president, Defense Department officials and lawmakers have in recent days warned of the increasing threat of a terrorist attack near the Kabul airport as thousands of civilians congregated in the hopes of evacuating the country ahead of the withdrawal of American forces on Tuesday.

Biden: “They gave me a list here. The first person I was instructed to call on….” pic.twitter.com/z1auBfxvKj

“Damnit Joe, you don’t have to announce we made you a list just call on them!”

“The first person I was instructed to call on…”

President Biden: “We have so much to do. It’s within our capacity to do it. We just have to remain steadfast, steadfast. We will complete our mission.”

"They Gave Me A List Here"...Sleepy Joe Speaks About Suicide Bombings in Afghanistan That Killed American Service Members

“They just put all those Afghans on a kill list!” – Biden officials gave Taliban list of American citizens and Afghan allies to expedite evacuation process