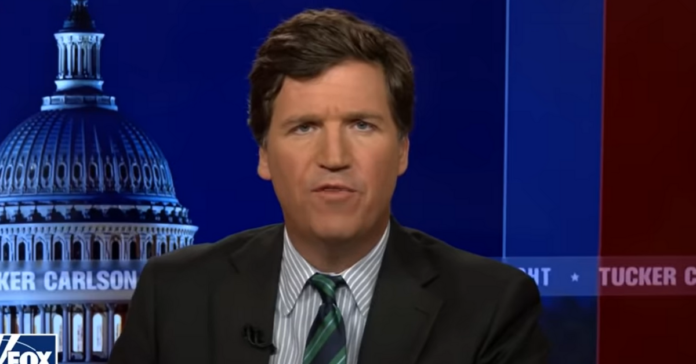 Tucker Carlson sounded the alarm about Joe Biden’s record setting pace to remake the federal judiciary. Tucker said: “The situation in Afghanistan is so bad and so humiliating for the United States that it’s easy to forget the Biden administration is in control of this country as well, so what have they been doing to us? While that’s been going on, we’ve tried to keep at least one eye open to find out.

“Well, it turns out, the Biden administration has been completely remaking the Federal Judiciary as the rest of us have been focused on Afghanistan. In just the past three months, without many people noticing it at all, the administration has gotten a remarkable number of its judges through.

“Joe Biden has nominated 33 of them, nine of those judges have already been confirmed, and many more soon will follow. So for perspective, no President in the past 40 years has come close to these numbers by this point in his first term.

“Many of these judges and the Biden administration will admit this are full-blown political activists, they are not jurists, they’re left-wing ideologues. They’re people like Myrna Perez who Joe Biden has just appointed to one of the most important courts in the country, the Second Circuit Court of Appeals.

“Myrna Perez has spent the last 15 years campaigning against voter ID laws, anyone who wants voter ID according to Myrna Perez must be a racist. Right before her confirmation hearings began, Perez wrote a piece for a social justice magazine in which she railed against, quote: “The GOP campaign to make elections less free.” Less free? Showing a state ID as do to get on an airplane or buy Sudafed at Walgreens.

“So, you would expect the Biden administration to flood the judiciary with lunatics like this. They want power and partisan judges will help ensure that that power goes completely unchecked.

“Here’s what you wouldn’t expect and that’s one of the most prominent members of the so-called Conservative Party to spend his time helping the Biden administration do that, but that’s happening. It’s exactly what’s happening.

“This summer, the Senate Judiciary Committee voted to advance Myrna Perez’s confirmation. Every Republican on the panel voted no except for one. Do you know who that was? It was Lindsey Graham of South Carolina.

“Now, why would Lindsey Graham support the confirmation of someone like Myrna Perez? Well to answer that question, it helps know that this is hardly an isolated case. We checked.

“Lindsey Graham is the only Republican on the Judiciary Committee who has not voted to reject a single judge the Biden administration has proposed, no matter how crazy they are. For procedural reasons, in a Senate split 50/50, Lindsey Graham’s support matters very much.

“Senate aides tell us that because of Lindsey Graham, one man, the Biden administration is able to rush its nominees through the Senate confirmation process faster than any other President in memory.

“So the most radical President of our lifetimes gets the most judges confirmed, thanks to Lindsey Graham.

“Now, those nominees include someone that many Democrats hope to see in the Supreme Court soon. That would be an activist called Ketanji Brown Jackson. Jackson is a former trial judge who spent the last four years writing political orders for the benefit of Jerry Nadler and Nancy Pelosi.

“For example, Brown once wrote an opinion comparing the previous administration to an illegal monarchy. That decision was so crazy that the D.C. Court of Appeals, which leans to the left reversed it not once, but twice.

“But it was good enough for Lindsey Graham who voted in favor of Brown’s confirmation. That’s because Lindsey Graham, in case you didn’t notice, spent most of last year begging for your money, money from conservatives at all hours on cable television has no problem installing judges who hate his constituents and you shouldn’t be surprised by that.

“A few years ago Graham admitted in an interview with POLITICO that his overriding political ambition was to quote, “stay relevant,” not to represent his voters or keep the left from destroying the country, but to ingratiate himself with the people in power and advance his own interests.

“So in that respect, Lindsey Graham has done exactly what he said he would. The question is why are conservatives continuing to promote him and allowing him to continue to sit on the Judiciary Committee?

“Well, we would love to ask that question of Lindsey Graham himself. We’ve asked him many times to come on the show but he refuses, because he’s afraid, and that’s a shame. That would be a very interesting fact-based conversation.”