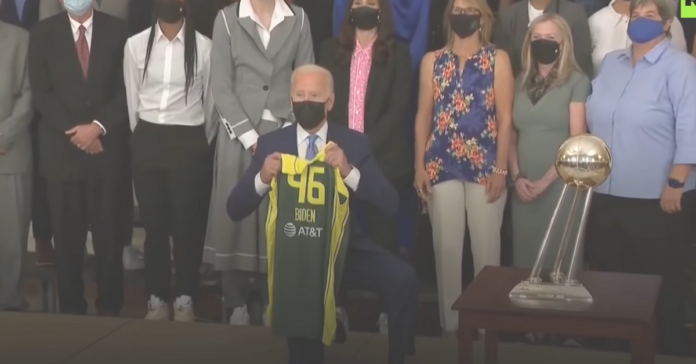 President Joe Biden got down on one knee in the East Room of the White House as the Kabul airlift debacle continues during the celebration of the 2021 WNBA champions Seattle Storm.

Joe said at the ceremony: “You know, I can say as much as I want — from the time my two daughters were born — that you can do anything a man can do.  It’s one thing for somebody to say that and keep pounding that in the head of your five granddaughters as well.  But guess what?  Until they see it, until they watch, it becomes real then.

“That’s why, by the way, she’s — and happens to be in Asia for me right now — but that’s why we have a female Vice President of United States of America who’s going to be — we’re going to have some presidents pretty soon.”

Latasha Brown, co-founder of Black Voters Matter, said the gesture was good to see, but “we cannot just have symbolic progress.”

And that they want Biden to go back on his word and get rid of the filibuster because “the filibuster has metaphorically had a knee on us for a long time.”

House Democratic leadership is set to meet with voting rights activists, lawyers and subdenomantional religious leaders this week to discuss all of the options on the table. The Poor People Campaign will be among the organizations present for the talks.

Without the For the People Act, Brown signals Americans are voting like we did in 1965, as two Supreme Court actions have gutted sections of the historic law and some Republican led states are creating restrictive voting laws.

The anger and frustration is palpable in the current state of voting rights.

President Biden’s inaction is also a flashpoint for Brown. She questioned, “where is that kind of passion and energy and commitment to voting rights? Because I’m not seeing him actually be able to say that he’s willing to do that.”

Brown is part of the leadership for the Good Trouble rally that is taking place on Saturday, the anniversary of the March on Washington.