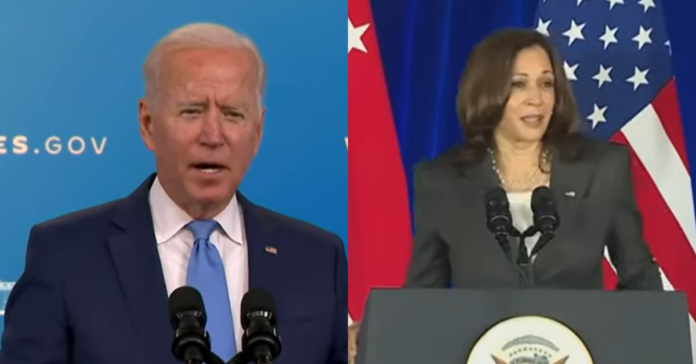 Joe Biden is having a bad week and it is now time to panic if you are in the White House. A new poll just came in and it spells absolute doom for Joe Biden, Nancy Pelosi, and Chuck Schumer. According to a new USA TODAY/Suffolk University Poll, Biden’s overall job approval rating now stands at 41% who approve versus 55% who disapprove.

This is a massive drop as he was hovering close to 50% approve and 50% disprove. But the numbers somehow get worse for Joe. Only 39% of people approve of Biden‘s handling of the economy which is a fatal number for an incumbant.

87% of Democrats approve of the job Biden is doing but in more terrible news for Biden and for Pelosi’s chances of keeping her job as Speaker, only 32% of independents say he’s doing a good job.

“Today, President Biden’s overall approval has taken a turn for the worse due to his awful job performance rating on Afghanistan,” said David Paleologos, director of the Suffolk Political Research Center.

“His approval on immigration and the economy are also upside down. The only issue keeping him remotely in the game is his handling of the COVID-19 pandemic, where he is barely at 50%.”

Biden’s decision to pull out troops was backed by most Americans, 53%-38%. But almost two-thirds, 62%, disapproved of the way his administration has handled that withdrawal.

“He basically handed the Taliban all these weapons, and he’s inspired a resurgent ISIS now,” said Aubrey Schlumbrecht, 51, of Lakewood, Colorado, a home health-care nurse and political independent who was among those polled.

“He is not even taking any responsibility. He says he owns it, but he’s blaming other people and he’s blaming the Afghan people themselves.”

John Plaskowsky, 55, a business manager from Suwannee, Georgia, said the news media’s coverage of the tumultuous withdrawal has been unfair to Biden.

“I would say probably for the last 10 years they’ve been ignoring Afghanistan, then President Biden gets handed a horrible deal from the previous administration,” he said in a follow-up interview.

While noting that he is a Republican, he said former President Donald Trump played a role by negotiating with the Taliban for a U.S. withdrawal that was supposed to be completed by May 1.

Approval among independents falls to 32%

Just 39% approve of Biden’s handling of the economy which is a surprisingly bad number.https://t.co/149pM2Mf5k

Joe Biden’s approval ratings have plummeted to 41% according to a USA Today poll released today. Biden’s at 32% approval among independents. These are the lowest approval ratings for a Democratic president since Jimmy Carter. https://t.co/vNfOnI7nU1

Hollywood Breaks With Andrew Cuomo, Strips Him Of His Emmy Award And Elimates Any Reference To Him Going Forward