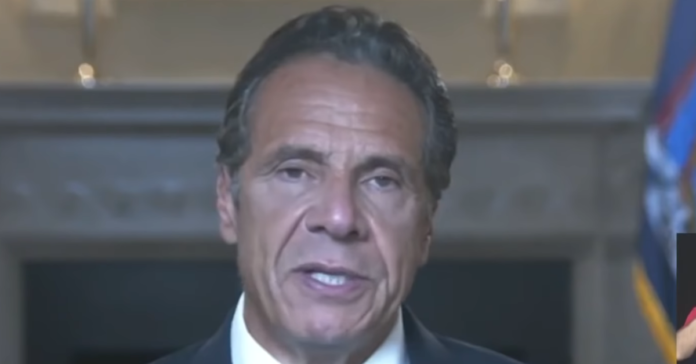 Cuomo got the award for duping the public on TV which they said at the time was “for effective communication and leadership during the COVID-19 pandemic.”

“The Governor’s 111 daily briefings worked so well because he effectively created television shows, with characters, plot lines, and stories of success and failure,” Bruce L. Paisner, International Academy president and CEO, said at the time. “People around the world tuned in to find out what was going on, and New York tough became a symbol of the determination to fight back.”

“These idiots should have pulled this Emmy months ago. Instead, they wait until the day Cuomo is out. Maybe they can give it to his anchor brother, who gave a powerful performance emerging from his basement after faking his own quarantine,” Fox News contributor Joe Concha said.

“What they did was so embarrassing. They gave an award to a lefty governor as part of a media-crafted public relations campaign to build up Cuomo as a possible presidential contender,” Dan Gainor said.

“Now that Democrats won the presidency without him, they can take back their sleazy award and pretend they never ran cover for an accused sex harasser tied to the deaths of thousands of New York seniors,” Gainor added.

“That kind of make believe deserves its own award. The academy should give itself an Emmy for Best PR Trying to Make a Thug Appear Like a Decent Person.”

The question of whether the International Academy would rescind the Emmy grew louder in recent weeks, after state Attorney General Letitia James’ investigation found that Cuomo had sexually harassed multiple women.

The investigation, released on Aug. 3, found that Gov. Cuomo “sexually harassed a number of current and former New York State employees by, among other things, engaging in unwelcome and nonconsensual touching, as well as making numerous offensive comments of a suggestive and sexual nature that created a hostile work environment for women.”

NEW: Andrew Cuomo has been stripped of his International Emmy. pic.twitter.com/gJHNY26hZ8