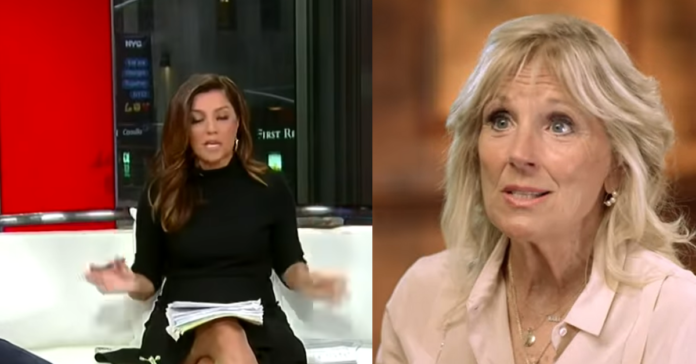 The first lady’s press secretary demanded an apology from Fox News and host Rachel Campos-Duffy over comments Rachel made about Jill Biden.

“This is disgusting,” said Michael LaRosa, Jill Biden’s press secretary. “@RCamposDuffy and @FoxNews know better. They can do better and their viewers deserve better. I hope they’ll apologize to the First Lady and leave this kind of talk in the [trash] where it belongs.”

Campos-Duffy criticized President Biden’s “mental state” before saying:“ And if you ask me, the most patriotic thing Jill Biden could have done was tell her husband ― to love her husband ― and not let him run in this mental state that he’s in,” she concluded. “I think she failed the country as well.”

“I think she failed the country as well,” she said.

“When you look at what’s hurting America, when you look at this lack of leadership, and you wonder, who are the people responsible for putting someone this incompetent and frankly this, you know, mentally frail in this position?” Campos-Duffy said.

“I’m sorry, as a political spouse, I can’t help but look at Jill Biden.”

“No one knew better his state of mind than Dr. Jill Biden.”

Campos-Duffy added that Jill Biden should have stopped her husband’s plans in Afghanistan, citing it as “the most patriotic thing [she] could’ve done” and noting that “I think she failed the country as well.”

Reps for Fox News did not immediately respond to TheWrap’s request for comment. You can watch Campos-Duffy’s full remarks in the video above.

Earlier on Sunday, Fox News announced that it had successfully evacuated three Afghan nationals who assisted with the network’s coverage of the war in Afghanistan, along with their families.

The trio served as “producers, drivers, translators and security guards” for Fox News correspondents during the 20-year presence of the U.S. military in Afghanistan.

This is disgusting. @RCamposDuffy and @FoxNews know better. They can do better and their viewers deserve better. I hope they’ll apologize to the First Lady and leave this kind of talk in the🗑️where it belongs. https://t.co/emBFCwKDiV

Mornings are better with your friends at ⁦@foxandfriends⁩
Still have 2.5 hours left. Pour a cup of coffee and join us for a show packed with news & commentary. pic.twitter.com/NR3TBlGWDL

Game Show "Jeopardy!" About to Make Huge Mistake and Lose Millions of Viewers