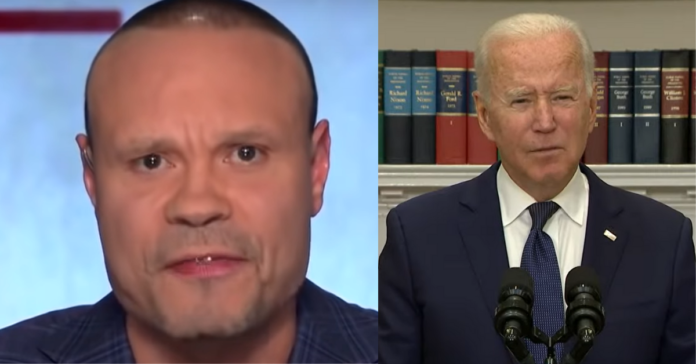 Fox News host Dan Bongino called out President Joe Biden during his Sunday evening show over his handling of the U.S. pullout from Afghanistan saying Biden was a coward. Dan said: “I have a couple of messages I need to get out there – they’re important, time for BS is over.

“You, you, you failed everyone. Because you were a coward. You failed. History will remember this as one of the most colossal, epic political failures in America’s history. And you did this. Not our military. You did this.

“And not only did you fail, when your failures became obvious to everyone, when we watched Afghans fall off planes trying to get out of a country taken over by medieval savages, you dismissed them, telling people, ‘Don’t worry, it was just a couple days ago.

“Is there a statute of limitations on people falling off planes, trying to ride planes on the outside to escape your failure.

“Listen, that’s a serious message. I don’t take it lightly.

If he doesn’t resign, Joe Biden should be impeached.

“I get what you are saying that we would be handing the country to Kamala Harris. Ladies and gentlemen, it can’t get any worse.

Complicating matters for Joe Biden is the reality on the ground. From The Hill:

A Taliban spokesperson on Monday said the militant group will not accept requests to extend the evacuation deadline in Afghanistan as Western powers leave open the possibility of continuing operations past Aug. 31.

“It’s a red line. President Biden announced that on 31 August they would withdraw all their military forces. So if they extend it that means they are extending occupation while there is no need for that,” Taliban spokesperson Suhail Shaheen told Sky News in Qatar’s capital of Doha.

“If the U.S. or U.K. were to seek additional time to continue evacuations — the answer is no. Or there would be consequences,” Shaheen added. “It will create mistrust between us. If they are intent on continuing the occupation it will provoke a reaction.”

On Sunday, President Biden said he was optimistic that all evacuation operations would be completed by Aug. 31, though he stated that discussions about potentially extending the deadline were being held.

“Our hope is we will not have to extend. But there are going to be discussions, I suspect, on how far along we are in the process,” he said.

Dan Bongino delivers a powerful message to our military veterans.