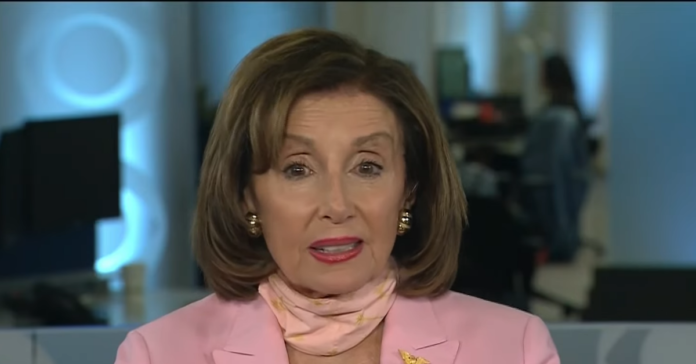 A group of nine moderate Dems in the House just revolted against Nancy Pelosi, and Joe Biden’s agenda hangs in the balance. AOC and the left flank want a vote on Pelosi’s dream $3.5 trillion spending plan before they pass the Senate’s bipartisan infrastructure bill. And they are not caving.

The moderate Dems know this is not only bad policy but political suicide – if the Dems are the ones to sink Biden’s agenda the predicted red wave in 2022 will be a tsunami. Remember what happened when Paul Ryan and the GOP blocked what Trump wanted to do? The Dems swept to a huge majority in the House.

But in 2020 the GOP evened the playing field so Pelosi has no room to maneuver. Someone will have to cave. “The House can’t afford to wait months or do anything to risk passing the infrastructure bill,” Rep. Josh Gottheimer, D-N.J., one of the nine moderates said.

“If there’s some sort of way to work this out, then of course we’re working toward that. I’ve said that to leadership,” Gottheimer said before adding his group of the nine moderate refuse to “wait until December” to pass Biden’s infrastructure bill.

“Proceedings in the U.S. House will have no impact on Kyrsten’s views about what is best for our country – including the fact that she will not support a budget reconciliation bill that costs $3.5 trillion,” said Sinema spokesperson John LaBombard.

“It would send a terrible message to the American people if this bipartisan bill is held hostage,” Joe Manchin said in a statement.

The left flank is not taking this lightly and they are now targeting the moderate Dems with political ads.

Progressive groups on Monday launched a six-figure ad campaign criticizing nine moderate House Democrats over their effort to block the party’s $3.5 trillion budget resolution in order to force a vote on the $1.2 trillion bipartisan infrastructure bill.

The Working Families Party, Indivisible Project, Sunrise Movement and Organize For Justice, a sister organization of the Justice Democrats, paid for the digital and TV ads, which are running in the lawmakers’ home districts.

“These nine conservative Democrats are sabotaging Biden’s agenda because it would make billionaires and corporations pay their fair share,” the ads tell viewers.

In a Monday op-ed, the lawmakers doubled down on their stance that the House send the bipartisan infrastructure bill to President Biden’s desk before considering the budget resolution that would set the stage for Democrats’ larger reconciliation package.

“You don’t hold up a major priority of the country, and millions of jobs, as some form of leverage. The infrastructure bill is not a political football,” the group of House Democrats wrote in The Washington Post.

New: Progressive groups launch ads to run in home districts of the 9 Dems threatening to muck up the WH-blessed infra x 2 process

⁦@ckmarie⁩ sets the (many) hours’ traffic of our stage: https://t.co/YJi9WToUN7

Biden Lashes Out When Reporter Asked If He Trusts The Taliban