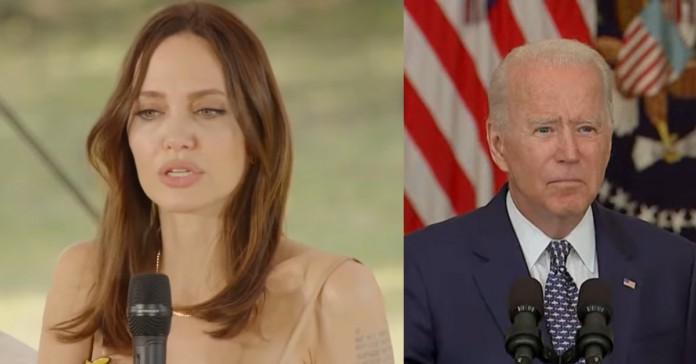 Jolie, despite being Trump supporter Jon Voight’s daughter, is not a conservative so this is bad for Biden as he watches not only the media but Hollywood drift away from him.

Jolies wrote: “Whatever your views on the war in Afghanistan, we probably agree on one thing: it should not have ended this way. Giving up the idea of a peace agreement between the Afghan government and the Taliban, appearing to cut and run, and abandoning our allies and supporters in the most chaotic way imaginable, after so many years of effort and sacrifice, is a betrayal and a failure impossible to fully understand.

I think of injured American servicemen and women I met at Ramstein Air Base—some who’d lost limbs fighting the Taliban— who told me how proud they felt to be a part of helping the Afghan people gain basic rights and freedoms.

I think of every Afghan girl who picked up her bookbag and went to school in the last twenty years even though she risked being killed for it—as so many were. In one district in Kabul, more than a hundred people have been killed in attacks targeting school girls in the last year alone.

I think of the Afghan women who served as lawyers and judges and police officers—even as their female friends and colleagues were murdered in cold blood, with the number of assassinations tripling in 2020.

I think of all the Afghan children and teenagers, now living in fear about the future. And the activists and journalists and artists who are in hiding, deleting their social media profiles and burning documents in a bid to keep themselves and their families safe. Some having to avoid sleeping more than one night in any one place like fugitives.

After all the bloodshed and effort and sacrifice and time, America seems to have lacked the will to plan this transition in a managed way. It was never going to be easy or perfect but could have been better, more decent and safer.

I, and millions of Americans, gave my faith and trust to successive administrations who told us that we were in Afghanistan to protect our country and support a new democratic Afghan state.

I believed that we were doing the right thing, that we stood shoulder to shoulder with Afghans, and that we were fighting in a noble cause. As we fade away from Afghanistan, it is hard to hold on to that trust.

As an American I am ashamed by the manner of our leaving. It diminishes us. We have lost leverage to influence what now happens in Afghanistan. We lack a strategy to monitor and support women and civil society in Afghanistan, who the Taliban have a history of targeting—banning girls from school, confining women to the home, and inflicting brutal physical punishments, including public lashing, on any woman perceived to have stepped out of line. We face a new refugee crisis, on top of record global displacement, with nearly a quarter of a million Afghans displaced within the country since May— 80% of them women and girls. Our allies are rightly upset, blaming the U.S. for a precipitate, unilateral withdrawal that missed the opportunity for any coordinated plan to preserve some of the gains made in the country. We have to acknowledge and address these realities, if we are to have any hope of learning from this dark moment. Evacuating some vulnerable people and accepting some more Afghan refugees for resettlement—as important as both steps are—isn’t going to solve the problem. It is only the beginning of what we need to do if all the years of effort and sacrifice in Afghanistan aren’t going to be wasted,” she wrote.

She wrote this on Instagram. “This is a letter I was sent from a teenage girl in Afghanistan. Right now, the people of Afghanistan are losing their ability to communicate on social media and to express themselves freely. So I’ve come on Instagram to share their stories and the voices of those across the globe who are fighting for their basic human rights.

I was on the border of Afghanistan two weeks before 9/11, where I met Afghan refugees who had fled the Taliban. This was twenty years ago.

It is sickening to watch Afghans being displaced yet again out of the fear and uncertainty that has gripped their country.

To spend so much time and money, to have blood shed and lives lost only to come to this, is a failure almost impossible to understand.

Watching for decades how Afghan refugees – some of the most capable people in the world – are treated like a burden is also sickening. Knowing that if they had the tools and respect, how much they would do for themselves. And meeting so many women and girls who not only wanted an education, but fought for it.

Like others who are committed, I will not turn away. I will continue to look for ways to help. And I hope you’ll join me.”

Trump "The scene of those big giant planes taking off with people hanging on the sides and falling off. There'll never be anything like that"