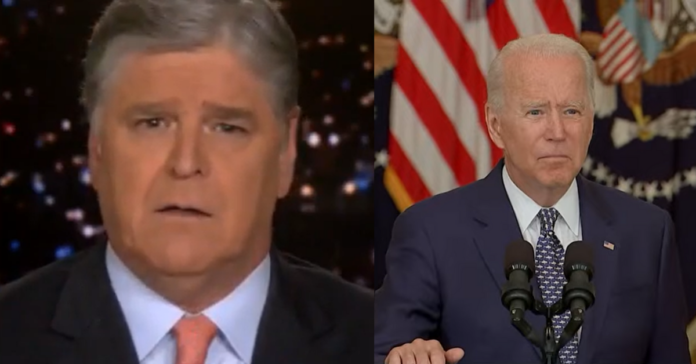 Sean Hannity cut through the media noise and unloaded on Joe Biden over the debacle in Kabul calling for the president to step down if he can’t handle the crisis.

Sean said: “At this hour the Biden administration, they still don’t know exactly how many. Joe’s estimating about 15,000. They don’t know where they’re located. They can’t even tell us exactly how many have been evacuated. And worst of all, they have zero plan to rescue any Americans.

“And as we speak, there are other countries at least trying and extracting their citizens with their special forces. For example, the British are calling it Operation Pity, but the United States as of now has no such program. Afghan families, literally passing their babies over a wall covered with razor wire, begging the British to take their children because they know that their children will be murdered by the Taliban if they don’t get inside of that airport.

“Think how desperate a mother or father would have to be to do such a thing. But they do it because that’s all they think they can do to save their kids.

“Because they know what the Taliban is all about and how they treat people.

“In fact, an internal State Department cable in July actually warned of Kabul’s imminent collapse. Joe did nothing.

“And now we’re experiencing what is the single worst foreign policy crisis and debacle ever.

“And today, Joe Biden had no public events, again. Called a lid, I’m done, at 3:30 in the afternoon, no press briefing.

“I guess Jen Psaki is back on vacation because we didn’t hear from her. We haven’t heard a word from Kamala Harris in more than a week.

“And thousands of American lives are at risk at this hour and the Biden administration is completely, totally detached and out to lunch.

“This is, by every definition, a dereliction of duty. If Joe Biden is not up for this job. Now, we’ve joked about it. We’ve kidded about it.

“We’ve shown you the video, and then we stop laughing about it because it’s not funny, because seeing Joe Biden weak and frail and a cognitive mess is not good for the United States.

“If he doesn’t care about the lives of Americans abroad, if he’s not up to this job, he needs to either step down or be removed.

“If he just wants to live out his remaining days on a beach in Delaware, I’m fine with that. Step down. Let someone more capable take over.”

HOLDING BIDEN ACCOUNTABLE: Afghanistan is crumbling, and everyone wants to know why the U.S. wasn’t better prepared for a Taliban takeover. TONIGHT, @GOPLeader Rep. Kevin McCarthy will tell “Hannity” how Republicans are working to hold Biden accountable for this catastrophe.