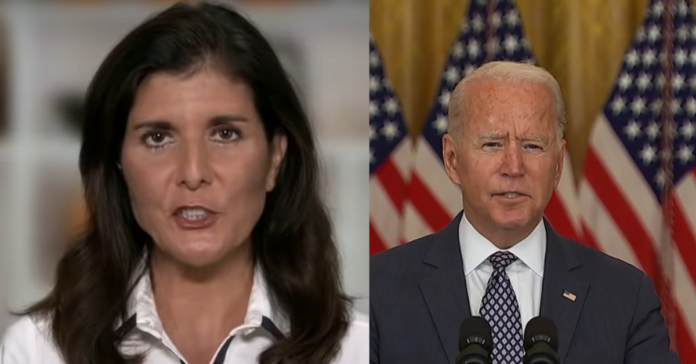 Former U.S. Ambassador to the United Nations Nikki Haley dropped the hammer on Joe Biden over his ‘ineptitude.’

“The Taliban is among the most barbaric forces in the world,” she said. “Its perverted version of radical Islam is once again being forced upon innocent people, with summary execution for those who oppose it. Millions of lives will now be savaged or lost.”

She continued: “It is heartbreaking for the thousands of American servicemen and women, my husband Michael among them, who risked their lives in Afghanistan to keep the Taliban from power. I thank God Michael came home safely. Many did not. Their sacrifices mattered, but they appear to matter less now.

“These epic moral dimensions of President Biden’s failure must never be minimized. But there are also massive strategic dimensions for America’s national security that should draw our attention going forward.

“The cost of national humiliation is not cheap.

“Because of President Biden’s ineptitude, on the twentieth anniversary of the worst ever attack on our homeland, the Taliban flag will once again fly over the Afghan seat of government.

“Biden’s professed interest in human rights is in shambles.

“His oft-proclaimed desire to work more closely with our allies is now laughable.

“His posture toward our enemies is dangerously weak.

“We must not allow the surrender in Afghanistan to cripple our national will.

“When we are a unified and strong nation, there is no more powerful force on earth.”

Biden tried to do some cleanup today and attempted to spin the disaster but came up short. From The Hill:

President Biden on Friday said he has yet to hear any allies question the credibility of the United States amid the chaotic withdrawal of forces from Afghanistan.

“I have seen no question of our credibility from our allies around the world,” Biden said following remarks on the ongoing evacuation effort in Afghanistan.

“The fact of the matter is I have not seen that. As a matter of fact, the opposite I’ve gotten,” Biden added. “The exact opposite. We’re acting with dispatch. We’re acting, committing, doing what we said we would do.”

Biden said he’s spoken with NATO allies and that “every one of them knew and agreed with the decision I made to end, jointly end, our involvement with Afghanistan.”

Secretary of State Antony Blinken has been in touch with NATO officials, and White House national security adviser Jake Sullivan has spoken to several of his counterparts around the world, Biden said.