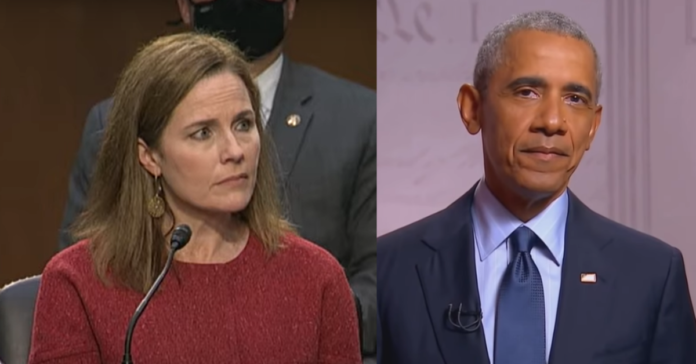 “Today’s Supreme Court decision is disappointing, but not surprising. We still believe that preserving the status quo is fundamental to preventing irreparable harm in Jackson Park,” the petitioners’ co-counsel Michael Rachlis said.

“Nonetheless, our core arguments seek to protect the long-term environmental and historical resources in Jackson Park, and we look forward to presenting our evidence and these arguments in the appellate and district court in the coming weeks.”

“We greatly appreciate the continued support of our project and process by the courts, including now from the highest court in the land,” an Obama Foundation spokesperson said.

“With their support and the outpouring of support we’ve received from so many on the South Side and across the city of Chicago, we were so pleased to be able to kick off our construction this past week and get us one day closer to doors opening at the Obama Presidential Center.”

Barrett is the Supreme Court judge tasked with handling emergency matters from Illinois, and could have acted on the petition or referred it to other justices. The court’s website on Friday indicates she rejected the bid.

The advocacy group also claimed that the construction evaded a federally required review process on its environmental impacts, and said the project should instead be built in Washington Park, which is a few miles away.

“In constructing the OPC, Respondents will need to demolish significant parts of Jackson Park, its historical resources, parkland, and trees, which will, in turn, adversely affect the human environment, the historic landscape, wildlife, and migratory birds,” the group said in an emergency request for a temporary injunction filed with the Supreme Court on Tuesday.

The advocacy group Protect Our Parks and several other plaintiffs claimed that federal, state and local governments illegally segmented the project into smaller pieces in order to evade a full assessment of its environmental impacts.

They also argued that authorities ignored the possibility of using an alternate site to the planned location in Jackson Park. The parks group has said the library should be set in Washington Park a few miles away.

Trump To Hold Biggest Event Of The Year In Alabama This Weekend: ‘We would not be surprised to have 20,000-plus”