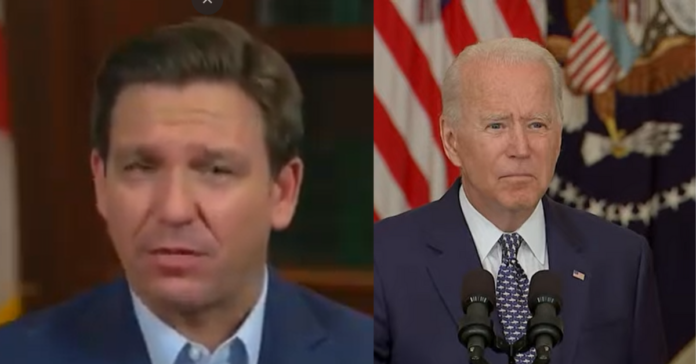 Florida Governor Ron DeSantis dropped the hammer on President Joe Biden during a Fox News interview last night over the debacle in Kabul saying Biden is asleep at the switch.

DeSantis said: “Well, he’s asleep at the switch. And first, let me say I mean, obviously, after 9/11, we needed to go in and rout the Taliban and Al Qaeda. But I think in hindsight we should have come home after that.

“I think trying to do the democracy and all that, I think has been very problematic. Now, having said that, and I think Trump was right to say we needed to come home from Afghanistan, how you do that matters; when you’re leaving thousands of Americans to fend for themselves behind enemy lines, that matters.

“When you’re leaving billions of dollars in military equipment for our enemies to just take, that matters.

“It’s going to make that area a disaster. Obviously, Americans are at risk.

“And Sean, you know, who’s looking at this? China, Russia, North Korea, all of our adversaries are taking the measure of Joe Biden.

“And they see that this is not somebody who’s capable of leading with conviction and leading on the world stage. So they are going to do everything they can, as long as he’s president, to take advantage of that.

“And I think we’re in for a rocky three and a half years, as long as he’s president.

Hannity said: “I don’t know how we get every American out of this safely. There was one big part of the President’s message and this is the call that I keep referring to — confirmed on this program last night by Mark Meadows, the Chief of Staff, Donald Trump was very clear that the Taliban, if you step out of line one time, I will obliterate you, there would be no waiting. It would happen immediately and expeditiously.

“Joe Biden didn’t lift a finger, governor. How do you not react when it’s happening before your eyes?

DeSantis said: “Well, not only that, he was on vacation, they had to ply him off of vacation to give a kind of a half-cocked statement on camera that he said wasn’t taking questions.

“Then he goes back on vacation, and he is obsessed while you have all this stuff going on with Afghanistan, obviously all this stuff at the southern border — which you and I have talked about — one of the biggest border disasters in the history of our country, inflation, gas prices — and what does he do?

“He is obsessed with having the government force kindergarteners to wear masks all day in school.

“And you got to wonder, where are your priorities that you’re so obsessed with this issue and so obsessed with taking away parent’s rights and you’re letting Afghanistan burn, our border burn, and so many other things in country fall to pieces?”

Gov. Ron DeSantis savages Joe Biden for his inability to lead. Biden is showing all of America’s adversaries—China, Russia—who are taking his measure and seeing someone who is incapable of leading and they will take advantage of that for as long as he’s president. pic.twitter.com/eIBXozSKMT