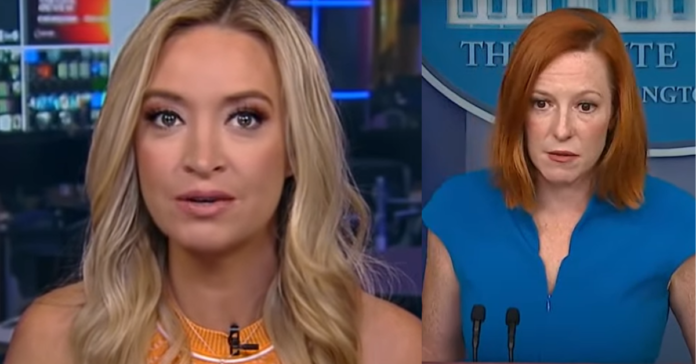 “Jen Psaki promised us a daily White House press briefing,” McEnany said. “There isn’t one today. There wasn’t one Monday. When the going gets tough, the daily press briefing that she promised goes out the window.”

“When you are a press secretary at any entity, you anticipate whatever the questions will be,” McEnany said of Pentagon Press Secretary John Kirby. “One of the most obvious questions is how many Americans are on the ground.”

“He didn’t take up the time to pick up the phone and call Secretary of State Antony Blinken and get that number for us when you are the one place we are getting information from today when there are nearly 15,000 American hostages on the ground?”

“And the Pentagon spokesperson could not pick up the phone and Jen Psaki won’t go to the podium to give us these very basic answers we deserve,” she said.

A bipartisan group of 55 senators is calling on President Biden to “immediately evacuate” Afghans who helped the U.S. during its military involvement in the country as the situation in Afghanistan continues to deteriorate.

The group, led by Sens. Joni Ernst (R-Iowa) and Jeanne Shaheen (D-N.H.), penned a letter to Biden on Wednesday asking the administration to quickly pull Afghans who are eligible for Special Immigrant Visas (SIVs) from the country, along with their families.

SIVs are granted to Afghan individuals who were employed by or worked on behalf of the U.S. government during America’s operations in Afghanistan.

It calls for adding an additional 8,000 visas to the SIV program and removing a number of hurdles that made it difficult for those eligible to receive a visa.

“We write to urge the immediate and full implementation of recently-passed legislation amending the process and eligibility for the Afghan Special Immigrant Visa (SIV) program and for the urgent evacuation of SIV applicants whose service to the U.S. mission has put their lives in jeopardy,” the senators wrote in the letter.

Pres. Biden repeatedly denied that military leaders told him the US should keep 2,500 troops in Afghanistan during his ABC interview.

But back in April, WH press Secretary Jen Psaki acknowledged that some military leaders did make that recommendation:
(H/T @AtienzaElias) pic.twitter.com/q7KXKDiPj9

Former Trump National Security Advisor Slams Biden...Says Trump's Plan for Afghanistan Would NOT Have Ended Like This