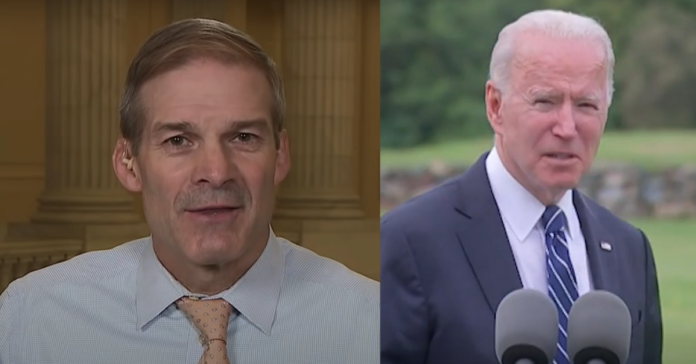 Jim Jordan, the ranking member of the House Judiciary Committee, has launched an investigation of Biden’s DHS using third-part  firms to spy on Americans saying it “would have serious consequences for the civil liberties of all Americans.”

Jordan demanded records and a briefing from the Department of Homeland Security (DHS) to get to the bottom of it.

“The Obama-Biden FBI spied on President Trump’s campaign in 2016, and now the Biden-Harris DHS is looking to use third-party contractors to circumvent the Constitution and spy on American citizens,” Jordan said. “Every American, regardless of their political affiliation, should be wary of these types of attacks on our civil liberties.”

From The Wall Street Journal:

The Department of Homeland Security is considering hiring private companies to analyze public social media for warning signs of extremist violence, spurring debate within the agency over how to monitor for such threats while protecting Americans’ civil liberties.

The effort, which remains under discussion and hasn’t received approval or funding, would involve sifting through large flows of internet traffic to help identify online narratives that might provide leads on developing attacks, whether from home or abroad.

The initiative comes after the nation’s intelligence community failed to sufficiently identify and share signs of the threats that led to the assault on the U.S. Capitol by a mob of Donald Trump supporters on Jan. 6.

In addition to a staff-level briefing on the proposed initiative, Jordan has given the DHS secretary a Sept. 1 deadline to hand over documents related to the agency’s efforts to monitor American activity online including “warrantless surveillance.”

Calls to ramp up U.S. intelligence monitoring of Americans online escalated in the Jan. 6 aftermath as the left-wing activists who dominate the nation’s digital public square rapidly implemented a purge of conservative accounts.

In April, even the U.S. Postal Service reportedly began to conduct surveillance of citizen social media activity under the Internet Covert Operations Program, known as iCOP, as first uncovered by Yahoo News.

According to a March bulletin obtained by Yahoo that circulated around DHS, “Analysts with with the United States Postal Inspection Service (USPIS) Internet Covert Operations Program (iCOP) monitored significant activity regarding planned protests occurring internationally and domestically on March 20, 2021.”

“Locations and times have been identified for these protests, which are being distributed online across multiple social media platforms, to include right-wing leaning Parler and Telegram accounts.”

#NEW: @Jim_Jordan launches investigation into DHS’s proposed use of third-party firms to spy on Americans. pic.twitter.com/comEbJA5jR

The Obama-Biden FBI spied on President Trump’s campaign in 2016.

And now the Biden-Harris DHS is looking to use third-party contractors to circumvent the Constitution and spy on American citizens. https://t.co/9VrSHaQR1o

Breaking News: Truck Thought To Be Loaded With Explosives Found Near Library Of Congress