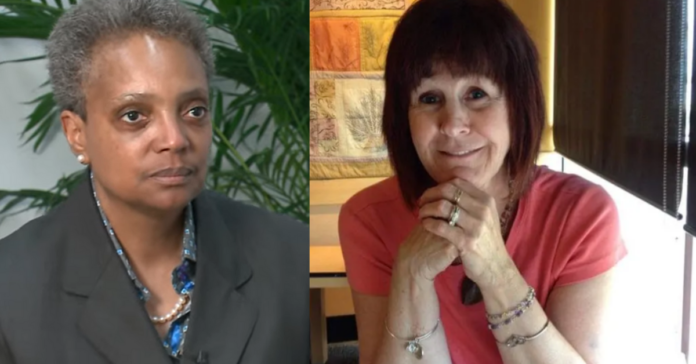 An innocent grandmother was gunned down on a busy Chicago highway after getting caught in the crossfire of two cars as she was on her way home after watching the Chicago White Sox play.

Denise M. Huguelet, 67, was shot around 10 p.m. Tuesday in the southbound lanes of the Dan Ryan Expressway near 63rd Street, according to Illinois State Police.

Her husband was driving when bullets from two cars having a shootout on the highway, this is the 156 shooting on a highway this year in Chicago, struck her in the back. She had 11 grandchildren. Huguelet was a special education teacher for 24 years.

“Her passion for students and her dedication to the community showed in all aspects of her work,” Evergreen Park school officials said on Facebook.

“Mrs. Huguelet’s nature with kids was kind, yet firm, to ensure that students were taught the independent skills they needed to be successful in their futures. She cared deeply about the academic needs of students, and the social and emotional well-being of every students’ needs.

“An Evergreen Park native, she was a dear friend to many colleagues who will remember her character as pure, honest, fair and kind. She was an incredible woman whose memory will always be with us.”

“On behalf of myself and the village board, we express our sincere condolences to the Huguelet family,” Orland Park Mayor Keith Pekau said.

From The Chicago Sun-Times:

The number of shootings on Chicago area expressways has more than tripled in the past three years.

There have been 156 shootings on expressways so far this year, outpacing the 128 shootings seen in all of 2020, according to state police figures. There were 52 shootings in all of 2019.

The Dan Ryan has seen seen 50 shootings so far this year, the most of any Chicago-area expressway, according to the state police.

The Eisenhower Expressway has the second highest number of shootings at 34, followed by the Bishop Ford with 25.

The Kennedy Expressway has had five shootings this year, and the Edens has had three.

A relative called the shooting “a shame” and said Huguelet was a wonderful woman who had just hosted a big family reunion.

She was a retired special education teacher who had worked at Evergreen Park District 124 for 24 years.

Evergreen Park District 124 said Huguelet is being remembered as an incredible woman who was kind but firm with her students.

Huguelet and her husband, Michael Huguelet, had celebrated their 45th anniversary this month and were joyous over the birth of their 11th grandchild, according to a Facebook post.

Denise M. Huguelet, 67, worked as a special ed teacher in Chicago for 24 years before her tragic death https://t.co/KEseM1Uc1X

[VIDEO] If You Wonder What It'd Sound Like If Reporters Got Pissed at Biden Admin, Here You Go...