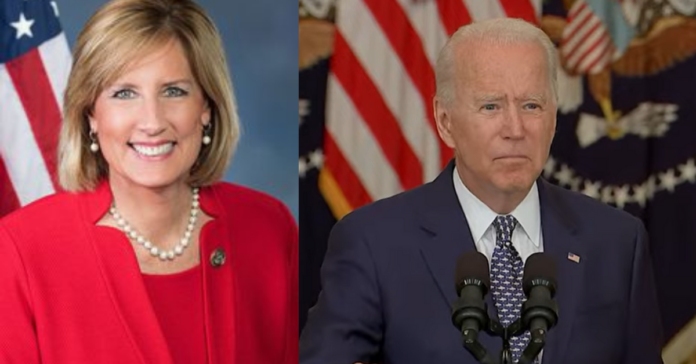 GOP Rep. Claudia Tenney just made her move and called for President Joe Biden to resign from office. She said his “unilateral, reckless retreat from Afghanistan,” shows that he “is not up to the challenge” of a national security crisis. She issued a statement that said:

“Congresswoman Claudia Tenney (NY-22) today released the following statement reiterating her call for President Joseph R. Biden to resign from office following his mishandling of the crisis in Afghanistan and complete failure to execute his duties effectively as Commander-in-Chief.

“In addition to a full congressional inquiry, which must happen immediately, today I am reiterating my call for President Biden to resign from office following his unilateral, reckless retreat from Afghanistan.

“His mishandling of this crisis shatters all confidence in his ability to serve as our Commander-in-Chief, which is any president’s most sacred responsibility. As American lives hang in the balance, our president has been isolated from his advisors and asleep at the wheel.

“As the situation deteriorated rapidly, President Biden only spent a few hours at the White House managing the crisis.

“Until recently, he hadn’t even spoken with a single world leader about the situation, even though our NATO allies have a robust presence in Afghanistan.

“A full investigation will ultimately determine whether President Biden’s disastrous handling of the crisis was the result of incompetence or some other cause.

“But even without this investigation, we can already reach the informed conclusion based on the available evidence and facts that President Biden is not up to the challenge of responding effectively to a national security emergency.

“As our adversaries watch on, one can only imagine they have determined America is vulnerable right now.

“The American people are at risk, and we cannot afford to wait for the next crisis to strike. President Biden is not up to role of Commander-in-Chief and should resign,” she said.

She said earlier about Biden’s debacle:

“Today is a sad day for our nation. Our enemies are jeering, our allies are reevaluating their relationships with us, and our President is nowhere to be found,.

“The American people are demanding answers and accountability for the military, intelligence, and political decision-making failures that led to President Biden’s disastrous and shameful retreat.

“The President bears full and direct responsibility for the current chaos and the obvious, horrifying ramifications of leaving U.S. personnel and partners vulnerable and abandoning valuable military hardware to the brutal Taliban.

“President Biden and his administration lied to the American people, telling us just days ago that the Afghan military was well-equipped to defend the nation from a Taliban insurgency.

“We were promised by the President that Kabul would not be another Saigon, yet the harrowing images of our diplomatic facility being evacuated by helicopter proves otherwise.

“Sadly, this may turn out to be far worse than Saigon. China was waiting in the wings potentially plotting this offensive with the Taliban and offering its support, while our President operated from a position of utter weakness.

“The Biden retreat will be studied for generations to come as an example of exactly how not to manage a military withdrawal and project weakness to America’s adversaries.

“President Biden has put American and allied troops in harm’s way. The Commander in Chief must come forward now to explain to the American people and our allies how his strategy failed so catastrophically and what his plan is for protecting our nation moving forward.

“We must hear from him immediately to restore faith in the Office of the President and regain our credibility around the world.”

Rep. Claudia Tenney called for President Joe Biden to resign from office following his “unilateral, reckless retreat from Afghanistan,” saying that he “is not up to the challenge” of a national security crisis. https://t.co/DZLOchOHji

[VIDEO] Sounds Like President Trump Has Soured On The Vaccine