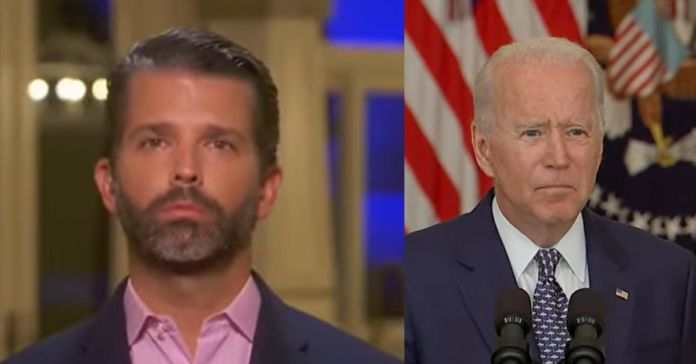 Donald Trump Jr. broke his silence last night on Hannity and trashed the hapless Joe Biden for the ongoing chaos in Kabul.

Trump Jr said: “I’m surprised they didn’t do the press conference from an ice cream shop, Sean because that’s all he’s been capable of doing. It’s an absolute embarrassment and the reality is this: As far as I’m aware, Joe Biden has created the largest hostage situation perhaps in the history of the world.

“If we have between 10 and 40,000 Americans blockaded off from an airport that our embassy, now when we say ’embassy,’ we have to use air quotes because the embassy has fallen to the Taliban, so a bureaucrat from D.C. is saying they can’t guarantee their safety but they should get there anyway.

“They’ve been blockaded by the Taliban. They’re trapped by a terrorist regime. This is arguably the largest hostage situation in history.

“He took my father’s plan and he wanted to change it. He wanted to be the one to get credit, so rather than doing it in the late spring before the fighting season and using your brain and knowledge and listening to the guys that are the door kickers, not the generals that have been too busy worrying about critical race theory and learning about white rage, which no one had heard of prior to last week, he didn’t. He wanted to make it his own so he could get credit.

“He made stupid decisions and now he owns all of it and owns the largest hostage situation that I’ve ever heard of and I imagine that anyone else has ever heard of,” he said.

Violence on the road to Kabul’s airport and chaos at the gates are hampering efforts to evacuate Americans and vulnerable Afghans looking to flee the country following the Taliban takeover.

Adding to the mayhem is mixed messaging from the State Department, which is urging Americans and those with travel documents to head to the Hamid Karzai International Airport “as soon as possible” even though the U.S. Embassy alerted people that it could not guarantee safe passage.

People who make it past the gantlet of Taliban checkpoints report being turned away amid surging crowds that U.S. forces are trying to disperse.

The number of Americans in Afghanistan is believed to be between 10,000 and 15,000, with more than 80,000 Afghans who likely qualify for evacuation based on their work with the U.S. military and government.

The U.S. has so far only evacuated a fraction of those people.

Government officials from the National Security Council and the Department of Defense (DOD) told congressional staffers on a call Thursday that they have evacuated 6,741 individuals since Saturday, of which 1,792 are American citizens or lawful permanent residents.

“Which of course is absurd because we heard from DOD they could do up to 9,000 a day,” said one congressional staffer who spoke to The Hill after the call.