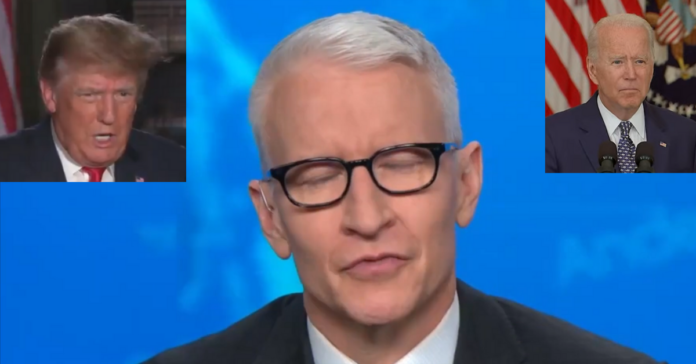 CNN is turning on Joe Biden and his administration over the debacle in Kabul as is MSNBC and other networks. The networks have been in the tank for Biden and the Dems for so long the viewers must be stunned to now hear constant criticism of Biden.

Really, it is hard to find anyone defending the chaos in Kabul even if they agree we need to get out of that country.

But in criticizing Biden, CNN gave up the game and admitted it for all to see when Stephen Collinson wrote: “Seven months into his term, Biden no longer gets credit simply for not being Donald Trump.”

From CNN: In one part of the interview, Biden said that he didn’t trust the Taliban but argued that the militia was cooperating with the US evacuation.

“I’m not sure I would have predicted nor would you or anyone else, that when we decided to leave that they’d provide safe passage for Americans to get out,” the President.

In the chaos at Kabul airport, however, it is far from clear that the Taliban is cooperating. While hundreds have people have been getting through, CNN’s Clarissa Ward in Kabul reported Thursday that there was no process, only mayhem of Afghans who worked for the US and are seeking exit visas because they fear for their — and their families’ — lives. Some lucky people got through Taliban checkpoints but many others were turned back or beaten, Ward said.

Biden is failing to adequately explain why he so badly failed to predict the swift collapse of the Afghan state. And his credibility has been sullied because his confident downplaying of the risks of the withdrawal has been repeatedly confounded by events. Seven months into his term, Biden no longer gets credit simply for not being Donald Trump.

The President spoke to ABC News after details emerged from a high-level Pentagon briefing that appeared to confirm the US never had sufficient troops left in Afghanistan to facilitate the orderly, deliberate withdrawal Biden had promised.

And the deeply awkward session in which Defense Secretary Lloyd Austin and the nation’s top military officer, Chairman of the Joint Chiefs of Staff Gen. Mark Milley, spoke to reporters also left open the grave possibility that the US military would be unable to rescue all American citizens and potential Afghan refugees before it departs for good.

Biden’s defensiveness, imprecision and apparent changes of position hardly project confidence or competence during an extraordinarily sensitive crisis on hostile foreign soil. Anytime a commander in chief does not appear in control or is in denial of obvious developments is a moment that threatens to inflict political damage.

For some context on this journalist, here’s what NewsBusters Executive Editor Tim Graham wrote of Stephen Collinson back in April:

Stephen Collinson is well-known among conservatives as the most hackneyed of the hacks at CNN. The CNN Politics Twitter account promoted his latest online essay with the words “President Biden to showcase his moderate radicalism in his big congressional address.”

Collinson argued “Biden’s quiet radicalism is expressed through a huge pandemic rescue bill, a larger proposal that redefines the concept of infrastructure, and a massive health and child care blueprint.” In other words, a socialist blueprint

So it’s quite a feat to see yet another liberal stalwart slam the President. It shows just how dangerous the situation is, and how it may be unspinnable even for some liberal journalists.

For now, that is. Give them some time, though, and liberal journalists will turn to the work of propping up Biden.

It’s been eight months since Joe Biden took office, and CNN only just now said that Joe Biden “no longer gets credit simply for not being Donald Trump.”@CNN isn’t a news organization. https://t.co/cxJfweRF8J

Breaking News: Truck Thought To Be Loaded With Explosives Found Near Library Of Congress

Capitol On Lockdown, Police Negotiating With Man In Pickup Truck Claiming To Have Explosive Device