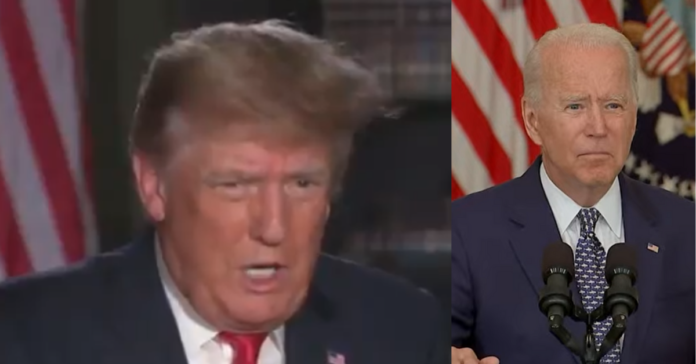 Trump said: “I don’t think in all of the years our country has ever been so humiliated. I don’t know what you call the military defeat or a psychological defeat. There has never been anything like what’s happened here. You can go back to Jimmy Carter with the hostages.

“We all thought that was a great embarrassment, and we were pulled out of that by Ronald Reagan. This is many, many times worse. You are dealing with thousands and thousands of Americans and others that are stranded and very dangerously really stranded in Afghanistan. So it’s something that you can’t even believe that a thing like this.

“I looked at that big monster cargo plane yesterday with people grabbing the side and trying to get flown out of Afghanistan because of their incredible fear, and they’re blowing off of the plane from 2,000 feet up in the air, nobody has ever seen anything like that.

“That blows the helicopters in Vietnam away. That is not even a contest. It has been the most humiliating period of time that I’ve ever seen.

“The people come out first, then I was going to take all of the military equipment.

“We have billions and billions of dollars worth of new Black Hawk helicopters, brand new that Russia will now be examining, and so will China, and so will everybody else to figure it because it’s the greatest in the world.

“We have brand-new army tanks and all sorts of equipment, missiles, we have everything.

“I understand Russia spends $50 billion a year for their entire military. We were spending $42 billion: Not 1%. They were saying 1%. That’s a lot of nonsense.

“$42 billion a year on defending this for years and years… and we get nothing out of any of these things that we do, whether it is them or many other countries.

“I think bad things will happen in respect to Taiwan because they don’t respect our leadership and they no longer respect our country.

“And that’s a really bad thing.”

“China does not respect us any longer.”

“I don’t even believe he’s calling the shots. What you need more than anything is a President who is respected.”

A year ago we were respected all over the world under President Trump. Now the Biden regime has made us a humiliated laughingstock without a real president pic.twitter.com/LwAKfMYR1w