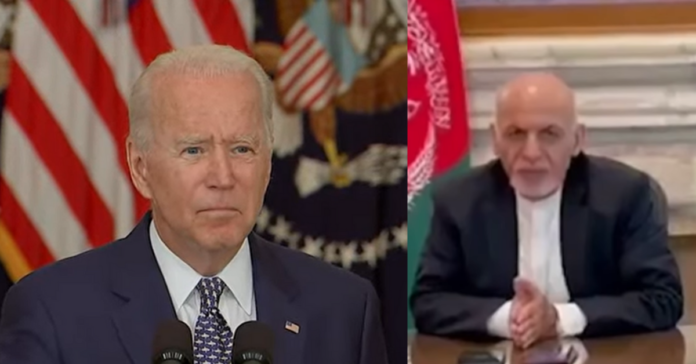 An earlier report from Reuters claimed Afghan President Ashraf Ghani fled the country with four cars and a helicopter full of cash. He was so loaded down by greed he allegedly had to leave a couple million behind on the tarmac because he couldn’t fit all that foreign aid he looted.

Now we have a new report from the BBC that puts a number figure on the looting and Joe Biden should be hanging his head in shame. Guardian journalist Hugo Lowell reported: “Afghan ambassador in Tajikistan says President Ashraf Ghani escaped with $169m worth of cash in bags before Kabul fell to the Taliban, BBC reports.”

“As for the collapse of the outgoing regime, it is most eloquently characterized by the way Ghani fled Afghanistan,” Nikita Ishchenko, a spokesman for the Russian embassy in Kabul  said earlier.

“Four cars were full of money, they tried to stuff another part of the money into a helicopter, but not all of it fit. And some of the money was left lying on the tarmac,” he said.

The arrest was demanded after Ashraf Ghani, Hamdullah Mohib and Fazel Mahmood Fazly were accused of theft of the treasury. The Afghanistan embassy demanded that Ghani should hand the treasury over to an international tribunal to restore the people’s wealth, local media reported on Wednesday.’

Ashraf Ghani, who fled the war-torn country as the Taliban took control of Kabul, was reported to have been landed in Oman after Tajikistan denied his entry into its territory.

Ischenko, the Russian embassy spokesman, confirmed his comments to Reuters. He cited “witnesses” as the source of his information. Reuters could not independently confirm the veracity of his account immediately.

President Vladimir Putin’s special representative on Afghanistan Zamir Kabulov said earlier it was unclear how much money the fleeing government would leave behind.

“I hope the government that has fled did not take all the money from the state budget. It will be the bedrock of the budget if something is left,” Kabulov told Moscow’s Ekho Moskvy radio station.

On Monday, Russia said its ambassador to Afghanistan will meet with the Taliban on Tuesday and that Moscow will decide whether to recognize the new government based on its conduct.

“Our ambassador is in contact with the Taliban leadership, tomorrow he will meet with the Taliban security coordinator,” Foreign Ministry official Zamir Kabulov told Ekho Moskvy radio station on Monday, according to AFP.

He said the talks between Ambassador Dmitry Zhirnov and the Taliban would center on how the group plans to provide security for the Russian embassy in Kabul.

New: Afghan ambassador in Tajikistan says President Ashraf Ghani escaped with $169m worth of cash in bags before Kabul fell to the Taliban, BBC reports.

The Afghan embassy in Tajikistan has asked Interpol police to detain Ashraf Ghani, Hamdallah Mohib and Fazal Mahmood Fazli on charges of stealing public wealth, so that funds could be returned to #Afghanistan, sources said.

Who’s tweeting from the official account of the Afghan Embassy in India? 😮😮#Afghanistan pic.twitter.com/tGO4dkA6eB

“The Taliban are not the kind of people you can believe”

Former Afghan judge, and refugee, Marzia Babakarkhail says “it is difficult for me to accept” what has happened in Afghanistan, adding she does not “accept the version of Islam led by the Taliban”https://t.co/OZhRCqo3it pic.twitter.com/TfcNX4E36i