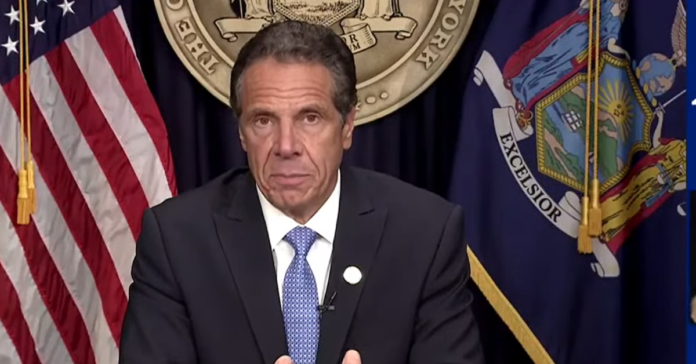 Disgraced Dem Governor Andrew Cuomo is sticking it to taxpayers one last time and filed for his $50K a year pension. This is a lifetime pension causing many to think the very wealthy Cuomo would just fade quietly away and not try to take it.

But filing for his pension may have just put a target on his back because the only way to take it away from him is through a felony conviction. He is facing multiple criminal probes as we speak.

It is the greed and the ego that always brings these guys down and do not be surprised if we have not seen the end of this tale. The metoo movement is out for Cuomo and they will not like him taking the pension. They will consider it a slap in their collective faces. “The governor just filed his application for service retirement. The date of retirement is Sept. 1, 2021,” a spokesperson for the state comptroller’s office said today.

Under current law, neither resignation or impeachment for alleged misconduct bars eligibility from obtaining a pension for state service. Only a felony conviction can trigger pension forfeiture.

Cuomo’s windfall is coming because he has accumulated 15 years of state service thanks to his 11 years as governor and four years as attorney general.

Cuomo, who is 63, can cumulatively receive more than $1 million in pension benefits if he lives another 20 years.

While exact employment records aren’t immediately available, we can estimate that Andrew Cuomo is entitled to at least a $50,000 pension benefit from the state of New York (thanks to the Empire Center’s handy pension calculator).

With his resignation, Cuomo has accumulated enough service credit—i.e., years of work on the state payroll—to file for retirement and start collecting his pension.

If he’s impeached nothing changes. However, a pair of state legislators have introduced a bill that would change that. It would start the process of adding an amendment to the state constitution to automatically revoke the pension benefit of a public employee who was impeached. The authors made it retroactive, so it would affect Cuomo’s pension.

If he’s convicted (of a felony) he might lose his pension. Under 2011’s Public Integrity Reform Act (hold your jokes) the pension benefit of a convicted felon could be reduced or revoked.

Officially filing for retirement sets Cuomo up to receive a monthly pension. He is eligible to receive at least $50,000 annually from NYS https://t.co/7UOGEoulJ6

You can’t make this stuff up… https://t.co/KqkASNQymZ