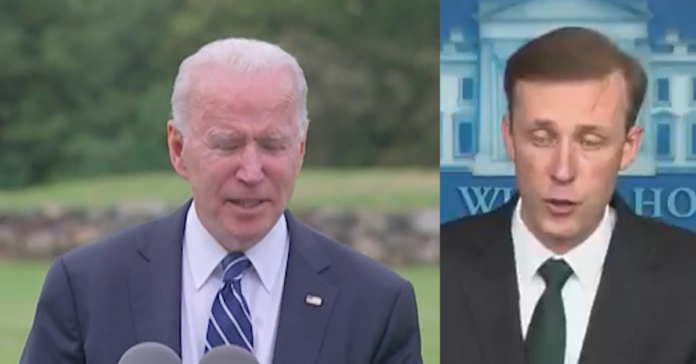 Joe Biden’s National Security Advisor Jake Sullivan stepped to the microphone to help deal with the debacle in Kabul and somehow made it worse. Jake gave up the game and admitted the awful truth – our weapons are now the Taliban’s weapons.

Jake said: “What has unfolded over the past month has proven decisively that it would’ve taken a significant American troop presence — multiple times greater than what President Biden was handed — to stop a Taliban onslaught. And we would’ve taken casualties.”

“We don’t have a complete picture of where every article of defense material has gone, but certainly a fair amount of it has fallen into the hands of the Taliban,” Jake added. Let that sink in for one minute. All those weapons and all that equipment are now the Taliban’s.

A reporter asked: “How can you just claim to be a global leader without making sacrifices?”

He continued: “My heart goes out to Afghan women and girls in the country today under the Taliban.

“I am also taking responsibility and so are my colleagues, the Secretary of state, the secretary of defense, the chairman of the Joint Chiefs of Staff, the directors of our intelligence agencies.”

Sen. Menendez, chairman of Foreign Relations Committee, said, “I am disappointed the Biden administration clearly did not accurately assess the implications of a rapid U.S. withdrawal. We are now witnessing the horrifying results of many years of policy & intelligence failures.”

Inside the White House and national security agencies, there has been fierce debate over how the current catastrophe unfolding in Afghanistan came to be. Officials who have built entire careers on issues related to the country have found it hard to fathom the blunt end to the 20-year conflict.

Never in the seven months of Biden’s presidency has the competence of the administration been so intensely questioned, with the President’s defiant and defensive speech on Monday only fueling the concerns rather than working to allay them.

A senior White House official told CNN a day after the speech that “there is no second-guessing of the President’s strategy,” but the official acknowledged that far more had to be done to explain how the crisis escalated and the government was blindsided by the Taliban’s surge.

Still, the official stressed the administration was focused “on looking forward, not looking back.”

“Yes, our competence is being questioned,” the official added. “The only way to fix that is to stabilize the airport and safely withdraw Americans and our partners to the best of our ability.”

The defiant message in Biden’s Monday speech reflected conversations he had with advisers over the last 48 hours. Officials were aware the situation that ultimately unfolded was possible — the Taliban overwhelming the civilian government in Kabul once US forces left — but had counted on it being unlikely.

Biden’s top aides have been candid this week in admitting they did not expect it to happen so quickly.

SULLIVAN: “We don’t have a complete picture of where every article of defense material has gone, but certainly a fair amount of it has fallen into the hands of the Taliban.” pic.twitter.com/FQmEcajqYS

REPORTER: “How can you just claim to be a global leader without making sacrifices?”

Taliban trying out the gym equipment left behind ! 😂😂 pic.twitter.com/4bfE7ukOJu