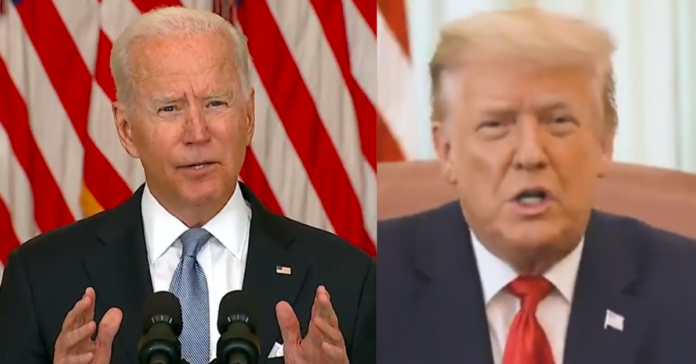 President Joe Biden tried again to blame former President Donald Trump for the debacle in Kabul, and not none single American, not even Hunter Biden, bought it. But it was journalist Jake Sherman who saw the real big picture, reporting that Biden was going back to his vacation at Camp David after his speech. (see below)

Biden said: “When I came into office, I inherited a deal that president trump negotiated with the Taliban under his agreement. US forces would be out of Afghanistan. by May one, just a little over three months after I took office, U. S. Forces had already drawn down during the Trump administration from roughly 15,500 American forces. The 2500 troops in country and the Taliban was at his strongest militarily since 2001. The choice I had to make as your president. It was either to follow through on that agreement or be prepared to go back to fighting the Taliban in the middle of the spring fighting season. There would have been no ceasefire after May one. There was no agreement protecting our forces. After May one there was no status quo of stability without American casualties.

“After May one there was only a cold reality. Have you either following through on the agreement to withdraw our forces or escalating the conflict and sending thousands more american troops back into combat in Afghanistan, lurching Into the 3rd decade of conflict. I stand squarely behind my decision.

He started his speech with: “Good afternoon, I want to speak today. The unfolding situation in Afghanistan. The developments that have taken place in the last week and the steps we’re taking to address the rapidly evolving events. My national security team and I have been closely monitoring the situation on the ground in Afghanistan and moving quickly to execute the plans we had put in place to respond to every constituency, including and contingency, including the rapid collapse we’re seeing now.

“I’ll speak more in a moment about the specific steps we’re taking. But I want to remind everyone how we got here and what America’s interests are in Afghanistan. We went to Afghanistan almost 20 years ago with clear goals, Get those who attacked us on September 11, 2001 and make sure al Qaeda could not use Afghanistan as a base from which to attack us again. We did that. We severely degraded al Qaeda in Afghanistan. We never gave up the hunt for Osama bin laden and we got him.

“That was a decade ago. Our mission in Afghanistan was never supposed to have been nation-building. It was never supposed to be creating a unified centralized democracy. Our only vital national interests in Afghanistan remains today. What has always been preventing a terrorist attack on American homeland. I’ve argued for many years that are missing should be narrowly focused on counterterrorism, not counterinsurgency or nation-building.

“That’s why I opposed the surge when it was proposed in 2009 when I was vice president and that’s why is President, I’m adamant. We focus on the threats we face today in 2021. Not yesterday’s threats today, The terrorist threat has metastasized well beyond Afghanistan. Al Shabaab in Somalia, al Qaeda in the Arabian peninsula, Al Nusra in Syria, Isis, attempting to create a caliphate in Syria and Iraq and establishing affiliates in multiple countries in Africa and Asia.

“These threats warren our attention and our resources. We conduct effective counterterrorism missions against terrorist groups in multiple countries where we don’t have permanent military presence if necessary. We’ll do the same in Afghanistan. We’ve developed counterterrorism over the horizon capability that will allow us to keep our eyes firmly fixed on the direct threats to the United States in the region and act quickly and decisively if needed.

“After 20 years, I’ve learned the hard way that there was never a good time to withdraw us forces. That’s why we’re still there. We were clear eyed about the risk we plan for every contingency, but I always promised the american people that I will be straight with you. The truth is, this did unfold more quickly than we had anticipated. So what’s happened, Afghanistan political leaders gave up and fled the country. The Afghan military collapsed sometime without trying to fight.

“If anything, the developments of the past week reinforced that ending us military involvement. Afghanistan now was the right decision. American troops cannot and should not be fighting in a war and dying in a war that Afghan forces are not willing to fight for themselves. We spent over a trillion dollars. We trained and equipped an afghan military force With some 300,000 strong, incredibly well equipped, a force larger in size than the militaries of many of our NATO allies. We gave them every tool they could need. We pay their salaries provided for the maintenance of the air force. Something that Taliban doesn’t have. Taliban does not have an air force. We provided close air support. We gave them every chance to determine their own future. We could not provide them was the will to fight for that future with some very brave and capable Afghan special forces units and soldiers. But if Afghanistan is unable to mount any real resistance of the Taliban now there is no chance that one year, one more year, five more years or 20 more years the U. S. Military boots on the ground would have made any difference.

“Here’s what I believe to my core. It is wrong to order american troops to step up in Afghanistan’s own armed forces would not. The political leaders of Afghanistan were unable to come together for the good of their people. Unable to negotiate for the future of their country. When the chips were down, they would never have done so while U. S. Troops remained in Afghanistan bearing the brunt of the fighting for them and our true strategic competitors, china and Russia would love nothing more than the United States to continue to funnel billions of dollars in resources and attention and the stabilized in Afghanistan indefinitely.

“When I hosted President Ghani and Chairman Abdullah at the White House in june and again when I spoke by phone to Ghani in july we had very frank conversations, we talked about how Afghanistan should prepare to fight their civil wars. After the U. S. Military departed to clean up the corruption in government. So the government could function for the Afghan people. We talked extensively about the need for Afghan leaders to unite politically. They fail to do any of that. I also urge them to engage in diplomacy to seek a political settlement with the Taliban. This advice was flatly refused. Mr Ghani insists that the Afghan forces would fight, but obviously he was wrong. Fine left again to ask of those who argue that we should stay. How many more generations of America’s daughters and sons would you have me send to fight Afghans Afghanistan’s civil war when Afghan troops will not, how many more lives american lives?

“Is it worth how many endless rows of headstones at Arlington National Cemetery? I’m clear on my answer, I will not repeat the mistakes we’ve made in the past. Mistake of staying and fighting indefinitely in a conflict that is not in the national interest of the United States, of doubling down on the civil war in a foreign country of attempting to remake a country through the endless military deployments of U. S. Forces.

“Those are the mistakes we cannot continue to repeat because we have significant vital interests in the world that we cannot afford to ignore. I also want to acknowledge how painful this is to so many of us. The scenes were seen in Afghanistan, their gut wrenching particularly for our veterans. Our diplomats humanitarian workers for anyone who has spent time on the ground working to support the Afghan people for those who have lost loved ones in Afghanistan and for americans have fought and served in the country, serve our country in Afghanistan. This is deeply, deeply personal.

“It is for me as well. I’ve worked on these issues as long as anyone I’ve been throughout Afghanistan during this war. While the war was going on from Kabul to Kandahar to the Kunar Valley, I’ve traveled there on four different occasions. I met with the people I spoken to the leaders. I spent time with our troops and I came to understand firsthand what was and was not possible in Afghanistan. So now we’re focused on what is possible.

“We will continue to support the afghan people. We will lead with our diplomacy or international influence and a humanitarian aid will continue to push for regional diplomacy and engagement to prevent violence and instability will continue to speak out for the basic rights of the Afghan people of women and girls. Just as we speak out all over the world. I’ve been clear, the human rights must be the center of our foreign policy, not the periphery, but the way to do. It is not through endless military deployments. It’s with our diplomacy or economic tools and rallying the world to join us. Let me lay out the current mission in Afghanistan. I was asked to authorize and I did 6000 US troops to deploy to Afghanistan for the purpose of assisting in the departure of us and allied civilian personnel from Afghanistan and to evacuate our Afghan allies and vulnerable afghans to safety outside of Afghanistan. Our troops are working to secure the airfield and ensure continued operation.

“Both the civilian and military flights we’re taking over air traffic control. We have safely shut down our embassy and transferred our diplomats. Our our diplomatic presence is now consolidated at the airport as well. Over the coming days, we intend to transport out thousands of american citizens. We’ve been living and working in Afghanistan. We’ll also continue to support the safe departure of civilian personnel. The civilian personnel of our allies who are still serving in Afghanistan Operation allies, refugee, which I announced back in july has already moved 2000 afghans are eligible for special immigration visas and their families to the United States. In the coming days, U. S. Military will provide assistance to move to move more s ivy eligible afghans and their families out of Afghanistan. We’re also expanding refugee access to cover other vulnerable afghans who worked for embassy, US non government agencies, uh US non governmental organizations and afghans who otherwise are at great risk in U. S. News agencies. I know there are concerns about why we did not begin evacuating afghans civilians sooner Part of the answer and some of the afghans did not want to leave earlier. Still hopeful for their country and part of it because the afghan government and its supporters discouraged us from organizing a mass exodus. To avoid triggering as they said, a crisis of confidence. American troops are performing this mission as professionally and as effectively as they always do. But it is not without risks. As we carry out this departure, we have made it clear to the Taliban if they attack our personnel or disrupt our operation, the U. S. Presence will be swift and the response will be swift and forceful. We will defend our people with devastating force if necessary.

“Joe Biden has the audacity to give us a “history lesson,” mentioning the killing of Osama bin Laden. HISTORY LESSON: Joe Biden was AGAINST the bin Laden raid.

“Biden on Afghanistan: BLAME TRUMP! How shameful. Trump wanted to get out of Afghanistan but did not for four years because of conditions on the ground. The Taliban Takeover was on JOE’s watch!”

Biden is going back to Camp David after this speech. pic.twitter.com/JSvhHZBr3d