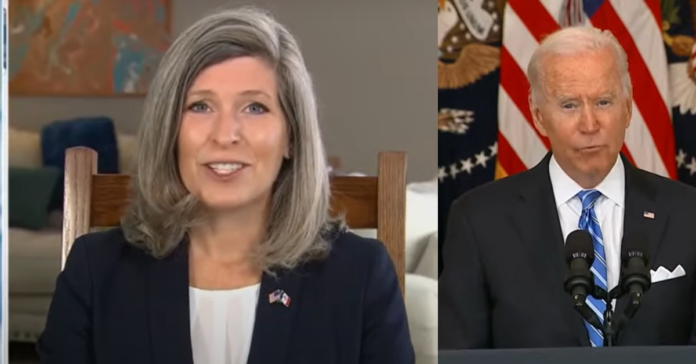 Sen. Joni Ernst, R-Iowa, the first female combat veteran elected to the U.S. Senate, ripped Joe Biden for the chaos in Afghanistan saying it is all on President Biden.

“This is a very grim reality, not just for the United States but for so many of our partners around the world to see Afghanistan fall like this. It is all on President Biden’s shoulders,” Ernst said.

“This rapid and haphazard withdrawal of American troops — before we knew that our embassy would be safe, before we had our Afghan interpreters and other friends out of Afghanistan, to allow it to fall like this without any sort of plan or recourse, it is shameful.”

“Again, it is all on President Biden. This did not have to happen,” Ernst said

Secretary of Defense Lloyd Austin laid the blame for the collapse of the Afghan forces on a lack of “willpower” and “leadership” during an all House member call, a member of Congress told Fox News.

The call, which occurred around 9 a.m. Sunday morning, lasted half an hour and included Secretary of State Antony Blinken and Chairman of the Joint Chiefs Mark Milley.

Austin said that the Afghan army had “all the advantages,” including three times as many troops and twenty years of training, but that “you can’t buy willpower and can’t buy leadership.”

He added that he was “beyond disappointed” that the Afghan military offered “zero resistance” in most places.

More on intel failure. How did the US get duped into thinking there was ever a peace process with the Taliban? Outfoxed by the Taliban? I’d say that’s embarrassing but shameful is closer

Lindsey Graham Warns Trump That He Is Writing His 'Political Obituary'