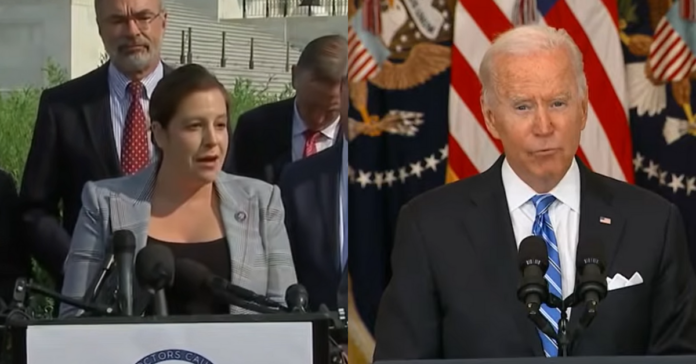 Elise Stefanik dropped the hammer on Joe Biden with a simple comparison between Trump and number 46. She said: “Under Trump: The US crushed the Islamic Terrorists like Soleimani, protected American citizens and embassies around the world, and delivered historic peace to the Middle East.

“Under Biden: Islamic Terrorists on the march, capturing an entire country & releasing their prisoners. American lives are at risk. A world in crisis because of Joe Biden. Remember, as the White House and their allies in the media attempt to blame others for the catastrophe in Afghanistan.

“Joe Biden gets it wrong every time on foreign policy, and many other issues. Everyone knew he couldn’t handle the pressure. Even Obama’s Secretary of Defense, Robert Gates, said as much.

The US crushed the Islamic Terrorists like Soleimani, protected American citizens & embassies around the world, and delivered historic peace to the Middle East.

Islamic Terrorists on the march, capturing an entire country & releasing their prisoners.

American lives are at risk. A world in crisis because of Joe Biden.

Remember, as the White House and their allies in the media attempt to blame others for the catastrophe in Afghanistan.

Make no mistake, there is one Commander-in-Chief.

One person who sits behind the Resolute Desk.

The buck stops with the President of the United States.

Boebert blasts Biden over Taliban takeover "No person who calls themselves the President of the United States should be on vacation while the world crumbles down around them."