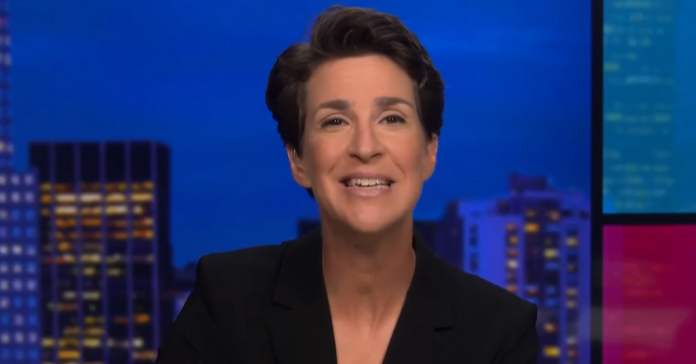 Rachel Maddow, MSNBC’s only real star, is readying to bolt the liberal network for greener pastures according to a stunning new report.

According to numerous people familiar with the situation, Maddow, 48, is very seriously considering dumping MSNBC when her contract ends early next year because negotiations are dragging and seem to have reached the dreaded contentious stage.

“Nothing has been decided. We are deep into it with NBCUniversal and Rachel has an excellent relationship with them,” her high-powered agent Mark Shapiro. “We don’t comment on employee matters,” MSNBC spokesperson Lorie Acio said.

Maddow has dropped hints she may be planning a shocking exit telling the New York Times earlier:

From The Daily Beast:

Sources told The Daily Beast that MSNBC is taking major steps to keep Maddow on board. People briefed on the matter say NBCUniversal CEO Jeff Shell and NBCUniversal News Group chair Cesar Conde also remain focused on retaining her, and are gearing up to offer her a major contract extension in order to do so.

One idea higher-ups have floated includes a reduced schedule to accommodate Maddow’s desire to lighten her hosting load.

In the 12 years she’s occupied the 9 p.m. slot, Maddow’s success has reoriented the network’s programming around her show and on-air tenor.

For years, the 8 p.m. slot hosted by Maddow’s bombastic mentor Keith Olbermann was seen as the coveted airspace on the network.

But following his acrimonious departure, Maddow emerged as the face of the network—the wonky, chipper, and loquacious Obama-era antithesis of Olbermann’s fire and brimstone screeds. And thanks to her dogged coverage of the Trump era, Maddow has forged a unique connection with the MSNBC audience, spawning a class of viewer dubbed the “MSNBC Mom” (earlier this month, fill-in host Ari Melber aired a viral TikTok in which one such viewer expressed frustration with how Maddow hadn’t been on the air for weeks).

MSNBC has been hard hit by the ratings plunge that has befallen the cable networks in the months following Trump’s exit from the White House.

But Maddow is coming off some of the best years of her career in terms of viewership. Her ratings skyrocketed following Trump’s 2016 electoral victory, and haven’t let up much since. She remains the highest-rated host at the network, forming a major ballast for MSNBC’s primetime lineup that consistently beats all shows at CNN and occasionally outpaces top primetime hosts at Fox News.

It has not been lost on network higher-ups that MSNBC does not have an immediate or obvious successor if Maddow chooses to leave.

Rachel Maddow, the highest-rated host on MSNBC, has held talks about leaving the cable news channel and launching her own new media ventures, according to sources who have spoken with her.

Maddow may ultimately decide to renew her contract with MSNBC’s parent, NBCUniversal, the sources said. That’s what usually happens in these situations. But difficult negotiations with NBC have made her departure appear somewhat more likely.

The Daily Beast reported earlier Thursday that Maddow is “seriously considering leaving the network when her contract ends early next year.”

Spokespeople for Maddow and MSNBC declined for comment to CNN Business. One of Maddow’s agents, Endeavor’s Mark Shapiro, told the Beast that “nothing has been decided. We are deep into it with NBCUniversal and Rachel has an excellent relationship with them.”

I can understand @maddow burning out. She will have a loyal following whatever her next move is. But if ⁦@MSNBC⁩ was wise, the execs would give her whatever she wants to renew her contract. https://t.co/sPSzRX90hQ

Donald Trump Sends Message To USA: “Do you miss me yet? Tragic mess in Afghanistan, a completely open and broken border”