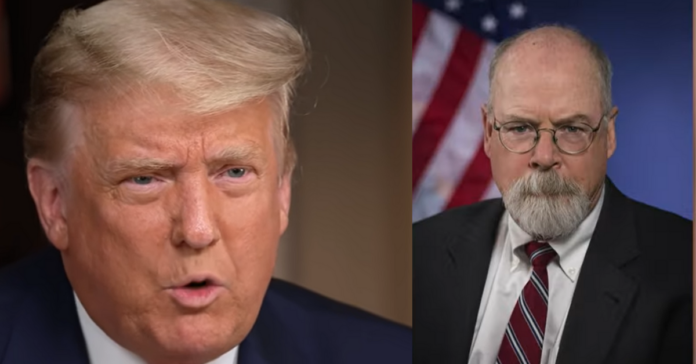 Former President Donald Trump will be happy to learn that Special Counsel John Durham is signaling there will be more charges in his investigation into what in the hell happened with the Russia probe.

According to multiple media reports, John Durham, the federal prosecutor picked to look into the origins of the Trump Russia investigation, has been presenting evidence before a grand jury. This is a good sign that Durham is going to bring more charges in his probe. So far he brought criminal charges against a former FBI lawyer who admitted altering a document related to Carter Page.

The Wall Street Journal, one of the media outlets breaking the story, reported earlier that Durham is weighing charges against some FBI employees and others not in government.

Durham was appointed to the position in 2019 by then-Attorney General William Barr, with a mandate to examine how the FBI and intelligence community set about investigating Russian interference in the 2016 U.S. election and potential coordination with Donald Trump’s presidential campaign.

His team has interviewed a broad swath of officials across the Justice Department and the CIA, including John Brennan, the former director of the agency.

Durham’s investigation is in addition to a separate inquiry by the Justice Department’s inspector general, which issued a December 2019 report finding significant errors and omissions in FBI applications to monitor the communications of former Trump campaign aide Carter Page.

The report did not find evidence that any actions by FBI or Justice Department officials were motivated by partisan bias.

Weeks before he resigned as attorney general, Barr appointed Durham — who for years served as the U.S. attorney in Connecticut — as a special counsel, a move designed to give him extra protection to complete his work under the Biden administration.

One area of focus has been the FBI’s reliance on anti-Trump research that was conducted by former British spy Christopher Steele.

He’s been looking at potential criminal charges against several lower-level FBI employees and people who aren’t in government, the Journal reported.

Durham’s prosecutors have focused on people outside the FBI who provided information that helped to fuel the 2016 investigation, the Journal reported.

Prosecutors are examining whether those who provided the information knew it was false at the time, and what the FBI subsequently did with it, the news outlet reported.

For example, Durham has asked questions about evidence related to allegations that a Trump Organization server was secretly communicating with Russian bank Alfa Bank, the Journal reported. The FBI investigated those claims in 2016 and concluded by February 2017 there were no such links.

Prosecutors appear to be pursuing a theory that if people passed along information they knew to be false to the FBI directly, or if they passed it on to others who later shared it with the FBI, it could be considered lying to the federal government, the Journal reported.

WATCH: Matt Walsh drops TRUTH BOMBS on school board over mandating children wear masks and media tries to smear him…