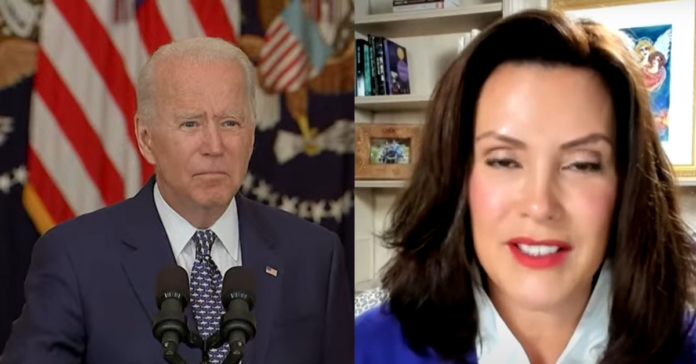 President Joe Biden made another embarrassing flub this time getting the names of two allies mixed up and sowing confusion during an online meeting yesterday.

Joe Biden almost chose Michigan Gov. Gretchen Whitmer as his running mate but yesterday he had another embarrassing ‘senior moment’ and called her by the wrong name. The president referred to the Dem Governor as “Jennifer.”

“I think we’re making some real progress, but thank you again Jennifer for what you’ve done and continue to do,” Biden told Whitmer during a meeting about the Democrats’ $1 trillion infrastructure bill.

Biden was referring to his Energy Secretary Jennifer Granholm who served as Michigan’s governor from 2003 to 2011.

From The Detroit Free Press:

Michigan Gov. Gretchen Whitmer bristled during the 2018 campaign when her Republican opponent, former state Attorney General Bill Schuette, called her “Jennifer,” in an apparent slip of the tongue.

“Learn my name,” Whitmer told Schuette, who apparently was thinking of Michigan’s first female governor, Jennifer Granholm, who is also a Democrat but looks nothing like Whitmer.

On Wednesday, it happened again. But this time, the slipup was by Democratic President Joe Biden, who included Whitmer on his short list of potential running mates in the lead-up to the 2020 presidential election.

“Thank you, Jennifer, for what you’ve done,” Biden told Whitmer, after she thanked Biden for his leadership in winning U.S. Senate passage of a $1-trillion bipartisan infrastructure bill she said will help her fulfill her 2018 pledge to “fix the damn roads.”

If approved by the U.S. House, the bill would send $7.3 billion to Michigan for highway repairs and more than $500 million for bridge work over the next five years, among other investments.

The slipup happened during a virtual event hosted by the White House related to the infrastructure package.

Biden had called Whitmer “Gretchen” earlier in the program.

Don Jr. mocks Psaki for saying "the Taliban also has to make an assessment about what they want their role to be in the international community"