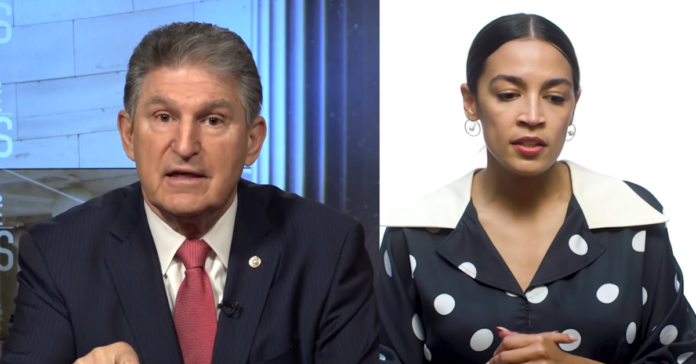 Nancy Pelosi and Alexandria Ocasio-Cortez woke up today with a big problem staring them in the face that threatens to sink their dream spending bill. With a 50-50 tie in the Senate every vote counts and if Joe Manchin won’t go along with the $3.5 trillion in spending AOC and Pelosi want the bill is DOA.

Manchin said: “Over the past year, Congress has injected more than $5 trillion of stimulus into the American economy – more than any time since World War II – to respond to the pandemic.

“Adding trillions of dollars more to nearly $29 trillion of national debt, without any consideration of the negative effects on our children and grandchildren, is one of those decisions that has become far too easy in Washington.

“Given the current state of the economic recovery, it is simply irresponsible to continue spending at levels more suited to respond to a Great Depression or Great Recession – not an economy that is on the verge of overheating.

“I firmly believe that continuing to spend at irresponsible levels puts at risk our nation’s ability to respond to the unforeseen crises our country could face.

“I urge my colleagues to seriously consider this reality as this budget process unfolds in the coming weeks and months,” he said.

The Democrat-led Senate approved a blueprint for the plan early on Wednesday morning in a 50-49 vote along party lines, after lawmakers sparred over the need for huge spending to fight climate change and poverty.

Manchin, a moderate who often acts as a bridge between his party and the Republicans, said in a statement that he was worried about potentially “grave consequences” for the nation’s debt as well as the country’s ability to respond to other potential crises.

NEWS: MANCHIN sounds like he is VERY skeptical about supporting a reconciliation bill at $3.5T

Budget sets up the reconciliation bill for later this fall pic.twitter.com/0u52Igmnmq

Warning sign for Dems here. Another sign they’ll have to pare back their reconcilation bill. Manchin says he has “serious concerns” with $3.5T bill. pic.twitter.com/tLAY9atsWC