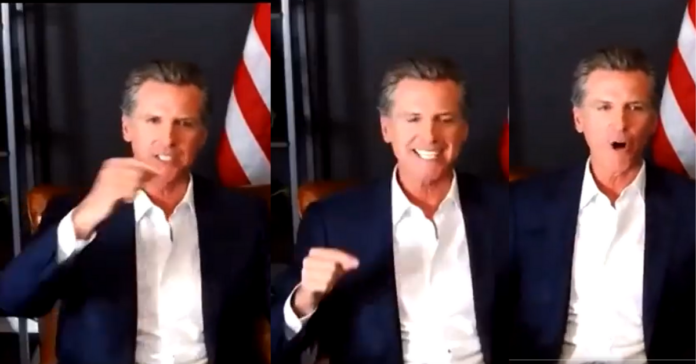 California Governor Gavin Newsom (D) is having a bad month and let it all come out in a new video that won’t help him stave off what’s coming. Newsom realizing turnout will be low enough to sink him in his recall election melted down during an interview with the Sacramento Bee editorial board.

“It’d be damn nice if our homegrown teams started focusing on what’s right!” Newsom said. “Everybody outside this state is bitching about this state because of our success.”

“Guys, forgive me, I know I am a little pointed today but I’ve been taking a lot from you folks for a lot of months,” Newsom said. “I should be able to express myself, too.”

From The Sacramento Bee:

When we met virtually with California Gov. Gavin Newsom in the late afternoon on July 29, we didn’t expect him to be defiant, sometimes angry, as well as thoroughly fascinating and intense from beginning to end.

But Newsom was all that and much more over 60 minutes of tough questions posed to him by opinion writers and editors from the California newspapers within the McClatchy Company: The Sacramento Bee, The Modesto Bee, The Fresno Bee, and The San Luis Obispo Tribune.

The governor sometimes pounded the table as he spoke. He challenged the premise of more than one question posed to him.

He spoke of policy decisions that he predicted would be viewed favorably by history even if voters “kicked” him out in this recall.

Newsom’s knowledge of issues that were urgent to California was impressive.

He saw a darker, more dangerous meaning to this recall that he feels could have national implications.

And yes, he ruefully acknowledged his mistakes that helped lead us to here — where Californians will vote up or down on whether Newsom should remain in office.

Newsom not doing so hot 😂 pic.twitter.com/LcTx2jJOSZ