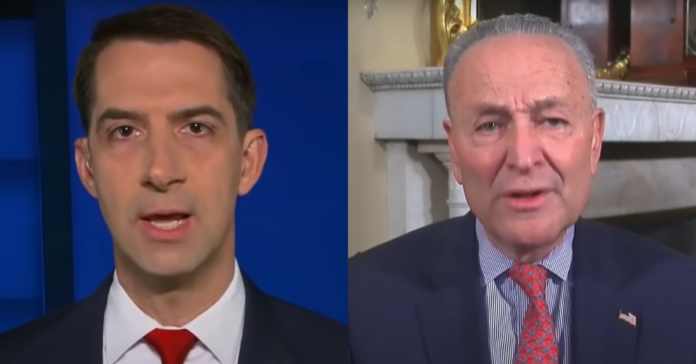 Democrats’ $3.5 trillion budget resolution package has quite a few surprises hidden away in it that will not make Americans happy. So some GOP Senators are sounding the alarm with a sneak attempt to offer a pathway to citizenship for millions of people in the resolution.

The bill was unveiled yesterday and it includes nearly $107 billion for the Senate Judiciary Committee to spend on finding a pathway to citizenship and border security. The package does not say who would be covered by the legislation. But it does direct the committee to provide “lawful permanent status for qualified immigrants.” A summary states the bill will end up giving green cards “to millions of immigrant workers and families.”

House Democrats want to cover Dreamers brought to the U.S. as children, but also migrant farmworkers and other workers deemed essential during the pandemic. The Dems also want people who hold Temporary Protected Status to get green cards.

Democrats could make around 10 million people eligible for a path to citizenship in this bill and remember, the GOP cannot do much to stop it if they ram it through using reconciliation.

“I think we should include in the reconciliation bill the immigration proposal,” Biden told reporters following a meeting with Congressional Hispanic Caucus legislators and others who have worked on immigration reform.

GOP Senators are not happy. From Breitbart:

Senate Republicans are sounding the alarm over an amnesty provision slipped into Senate Democrats’ $3.5 trillion budget resolution framework that they are seeking to shove through Congress via the filibuster-proof reconciliation process.

On Monday, Senate Democrats unveiled their budget framework that includes spending $107 billion in American taxpayer money to give amnesty to millions of illegal aliens.

The language of the framework is vague, asking the Judiciary Committee members to give “lawful permanent status to qualified immigrants.” Those who would qualify remains unclear, though Democrats have said in the past they want upwards of eight to 10 million illegal aliens given amnesty.

Sen. Tom Cotton (R-AR) wrote in a statement that “every conservative needs to get engaged to stop” the Democrats’ amnesty plan via reconciliation.

“During a historic border crisis, Democrats are trying to ram through mass amnesty for illegal immigrants … call Congress and tell them no amnesty,” Cotton wrote.

🚨During a historic border crisis, Democrats are trying to ram through mass amnesty for illegal immigrants.🚨

Every conservative needs to get engaged to stop this NOW.

Call Congress and tell them NO amnesty. https://t.co/FKpLJy6SoM

If you think Joe Biden is unpopular now, wait until voters get a good look at Biden’s budget – massive spending on amnesty, “environmental justice,” destruction of the coal industry, critical race theory “investments” – it’s the most radical left wing plan in American history

What are Bernie’s radical priorities for his $3.5 trillion spending plan?

Chrissy Teigen Says She's in Therapy 2x a Week, Then Dressed Up as "Marilyn Monroe" For Obama's Bday (Photos)