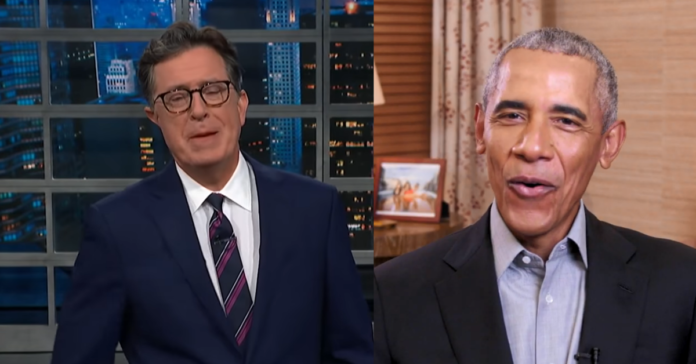 Stephen Colbert came clean confirming the rumor that he got snubbed by former President Barack Obama. He went public with the snub telling his audience that he got cut from former President Obama’s birthday party guest list saying “in the massive ‘scaling back,’ I got massively scaled.”

“We booked a flight, got a hotel. Then five days before the party, I got a voicemail saying they were scaling back,” Colbert said before he groveled to the Obama’s.

“It just goes to show you kids that if you work hard, put in your time, and get to be the No. 1 show in late-night television, you too can get disinvited from the cool kid’s party,” Colbert said.

“By the way, Mr. Former President: My own 60th birthday is coming up in three years and you, sir, are not…going to want to miss it.”

“Please come. I’d be so honored if you came,” Colbert slobbered. “I’ll scale me back to make room for you and Michelle, obviously. You’re lovely people.”

Former President Barack Obama held his 60th birthday celebration over the weekend, and despite it being smaller than originally planned, one attendee declared it the “party of all parties.”

Obama gathered friends and family at Martha’s Vineyard on Saturday for a birthday party, which ended up being scaled back at the last minute due to the spread of the Delta variant of COVID-19.

There were about 200 friends and family members in attendance for the outdoor gathering, according to People.

Videos that spread over social media provided a look into the party, with Obama seen dancing in a tent to the song “Birthday B—-” with the lyrics changed to “Birthday Prez,” The Washington Post reports.

In an Instagram post, music manager T.J. Chapman wrote, “The production, the sound, the lights, the staff, the food, the drinks — like, man, epic. Epic, epic, man. Y’all never seen Obama like this in your life.

The party of all parties.” An insider also told People that Obama “had the biggest smile” throughout the party, and he “danced all night.” Tom Hanks, Steven Spielberg, and John Legend were reportedly among those on the guest list, though The New York Times reported that Larry David, David Letterman, and Conan O’Brien were among those who were uninvited when the party was scaled back.

Obama still faced criticism for holding the party amid the recent surge in COVID-19 cases in the United States.

President Biden himself wasn’t in attendance, but he sent a happy birthday video message that played at the party, the Post reports.

Why A Judge Has Georgia Vote Fraud On His Mind: 'Pristine' Biden Ballots That Looked Xeroxed

Report: Thousands of Rejected Ballots in Atlanta Were Later Adjudicated and Counted