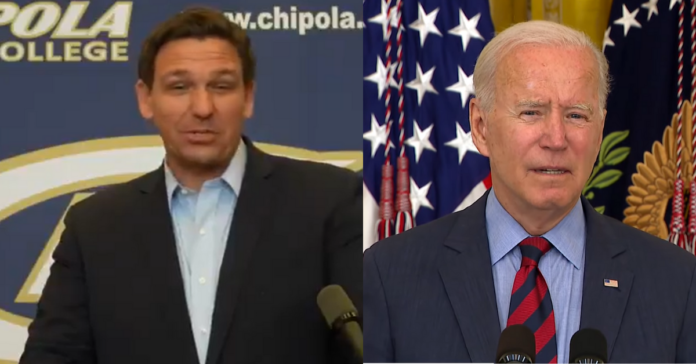 Florida Governor Ron DeSantis humiliated President Biden after Joe tried to make a joke at Ron’s expense saying “Governor who” when asked about his feud with Ron.

DeSantis fired back:  “I’m not surprised that Biden doesn’t remember me. The question is what else has he forgotten?” DeSantis then dropped the hammer on Joe Biden:

“Biden has even forgotten about the Constitution itself as we saw with what he’s done with the moratorium.

I’m the governor who protects parents and their ability to make the right choices for their kids education.

“I’m the governor who protects jobs and education and businesses in Florida by not letting the federal government lock us down.

“I’m the governor who answers to the people of Florida, not the bureaucrats in Washington.”

Eight Florida attorneys have filed a lawsuit against Gov. Ron DeSantis over his executive order on masks in schools, said Charles Gallagher, an attorney working on the suit.

This is the first legal challenge over the constitutionality of the governor’s order on masks, Gallagher said.

The order, issued late last month, directed the state’s health and education departments to issue rules preventing the implementation of school mask mandates in an effort to “protect parents’ freedom to choose whether their children wear masks.”

“They are framing this as a parent choice issue when this is really a public health issue,” Gallagher told CNN by phone.

…The plaintiffs in the lawsuit include parents who represent school-aged children from counties all over the state, including Miami-Dade, Orange, Hillsborough, Palm Beach and Alachua.

The lawsuit argues several points, according to Gallagher, including that the Florida Constitution guarantees a safe school environment and gives counties the power to govern themselves. DeSantis’ executive order attempts to strip the power away from school districts that are run by elected officials, Gallagher said.

“The Constitution is equal justice under [the] law and therefore we think that we are on the right side of these facts,” Gallagher said.

DeSantis: “I’m not surprised that Biden doesn’t remember me . . . The question is what else has he forgotten?” pic.twitter.com/uO3yy12Hbj