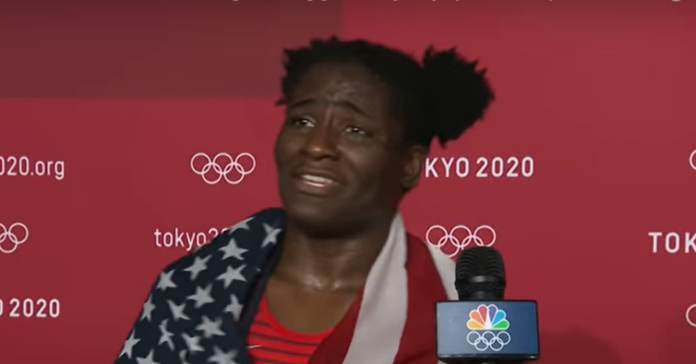 Patriotic U.S. gold medalist Tamyra Mensah-Stock will use her Olympic prize money to make her widowed mother’s dreams come true by buying her a food truck. Tamyra went viral for shaming woke athletes saying after she won the gold:

“I surprised myself! It’s by the grace of God I’m able even to move my feet. I just leave it in his hands. And I pray that all the practice, the hell that my freaking coaches put me through, pays off. And every single time it does. And I get better and better. And it’s so weird that there’s no cap to the limit I can do. And I’m excited to see what I have next.”

“I love representing the U.S. I freaking love living there,” she said. “I love it. And I’m so happy I get to represent the USA.”

She said of making her mother’s dreams come true: “She’s always doing back-breaking work and. I’ve just seen her struggling ever since my dad died and I don’t like seeing it.

“I made a promise to her and she loves cooking.

It’s just one of her passions. Growing up, we’d be like, ‘Ooh, mommy, you put your back into this food. Like you literally put your foot in it.’

“So how about I buy you a food truck and you can be anywhere you want to be?

“My mom was ecstatic. She’s like, ‘Yes, I would love that.’ This is five years ago. And I just keep telling her, ‘Just hold off, mommy, please just hold off,” she said.

Now, she said she can make her mother’s “dream come true.”

Tamyra Mensah-Stock’s Olympic victory is about more than just herself.

“Everybody is now seeing the greatness that I felt was inside of me and that my family and friends felt like was inside of me,” she tells PEOPLE of the history-making moment.

Part of that greatness is sharing her accomplishment with those who helped her get there, like her mother.

She plans to use the gold medal winnings — $37,500 for American Olympians, paid out by the U.S. Olympic and Paralympic Committee and untaxed unless athletes have a gross income over $1 million — to purchase a food truck for her mom.

Her life has not always been full of it. Born in Chicago to a Ghanaian father and a mother who “had to fight,” the family moved to Texas before she turned 1.

When she was in high school, her father died in a car accident on the way home from one of her wrestling meets. For a time, she blamed the sport, and struggled to carry on. When she married, she kept her dad’s last name, Mensah, as part of hers to honor him.

She went to tiny Wayland Baptist University, and, no, her ascent in wrestling wasn’t rapid. She won her weight class at the 2016 Olympic trials, but didn’t qualify, and instead went to Rio as a training partner.

When she qualified this time around after the pandemic-enforced delay, and a reporter told her she was going to Tokyo, she brought her palms to her cheeks.

“Oh, man,” she said through overwhelming emotions. She’d sought out her family immediately after her final win. “They mean a lot,” she said.