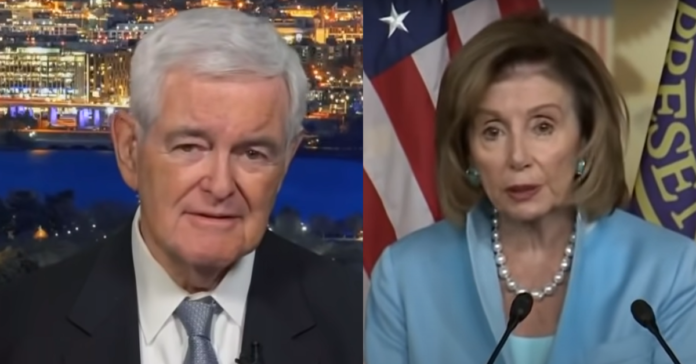 “As a former speaker of the House, I think that the U.S. House is very, very, very important,” Gingrich told host John Catsimatidis. “And watching Pelosi become a dictator, watching her break every single rule, watching her run things entirely on her own, I think, is the most destructive thing I’ve seen done by any American politician in a very, very long time.”

“And I think that we will see for years from now that problem. There’s no respect for the rule of law at the border,” he said.

“There’s no respect for the rule of law when it gets involved in an issue that the left-wing cares about.”

According to a Friday report, Pelosi mentioned that she was “very confident” Democrats would take the House in 2022 despite polling that indicates they would lose it.

Polling in key districts indicates that only 42% of likely voters trust Democrats to handle the economy.

”There are several scenarios here,” Pelosi said, seeming to refer to the lack of support. ”That was one of them.”

The speaker added that Democrats ”have their own connections to their own districts,” while adding that messaging was the key to winning those districts.

As a 20-year member of Congress and four-year Speaker of the U.S. House of Representatives, let me speak bluntly and directly.

Speaker Nancy Pelosi is the greatest threat to constitutional liberty in our lifetime.

With the passive support of an apparently cowardly caucus, she is behaving as a dictator more like Fidel Castro, Xi Jinping, Vladimir Putin, or Nicolás Maduro.

Pelosi ordered and kept the fencing around the U.S. Capitol for months – even when members of her own party were calling for it to come down.

She stripped a duly elected Republican of all her committee assignments.

In recent weeks, she has dictated to the minority party what members it can have on a bipartisan commission.

Now, she is threatening to have members of Congress and their staffs arrested if they do not follow the mask mandate which exists by her own decree.

(I am not aware of a Speaker ordering members arrested since 30 members broke into a brawl on the House Floor over the Kansas Territory’s pro-slavery Lecompton Constitution in 1859.)

If her power, arrogance, and destructiveness is allowed to continue growing, she will shatter the precedents of the U.S. House, undermine hundreds of years of common legislative precedent going back to the Magna Carta of 1215, and the destroy the established principle that those who write laws are still subordinate to them.

Newt Gingrich decried on “The Cats Roundtable” radio show on WABC 770 AM, hosted by John Catsimatidis, that House Speaker Nancy Pelosi is becoming a “dictator.” https://t.co/LHOiIzlHzg

Nancy Pelosi is drunk on power.https://t.co/N2ZQgoxhTY