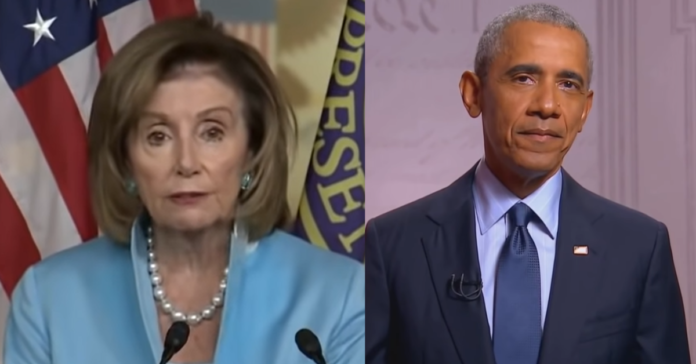 Pelosi’s team is saying she was never planning to attend Barack’s birthday party, and that she was on the same exclusive island as Obama’s big Saturday night party for a dinner in her honor on Sunday.

But when asked by a tourist how was Obama’s party, Nancy gave up the game saying: “I didn’t go. I had other parties to go to.” Pelosi’s response to the innocent question sounds like a person with hurt feelings who got cut from a guest list at the last minute.

Kevin Blake, 61, a lawyer visiting Martha’s Vineyard from Connecticut with his wife Karen, shouted out: ‘Hiya, how was Obama’s party?’

Pelosi, the most senior Democrat in the House, replied: ‘I didn’t go. I had other parties to go to.’

He laughed and said: ‘Thanks for keeping the Republicans in line.’

Pelosi smiled, and posed for a picture with the couple.

‘To be her, the most powerful woman in Congress, and not even go to his party? I find that hilarious,’ Blake told DailyMail.com.

‘And she’s the one carrying forward his agenda.’

Pelosi’s staff, however, said she was not on the island to attend Obama’s big 60th birthday party set to kick off at 7 p.m. A Pelosi aide said she was on Martha’s Vineyard to attend “private events in support of House Democrats.

The ex-president, who hit the links with pals including Don Cheadle, who flew in Friday for the supposedly scaled-down party. Meanwhile, Pelosi got the VIP treatment at Martha’s Vineyard Airport when she arrived.

Sources told The Post that Pelosi arrived in a private plane that taxied away from the paparazzi-filled main terminal to the far end of the airport where she was picked up and whisked away by private black cars.

Sources told The Post that Pelosi did have lunch at  the posh Winnetu Ocean Resort in Edgartown.

That’s the same place where, on Friday night, Obama hosted a pre-party that went on for about four hours and included many of the VIP guests expected at Obama’s party. Many of Obama’s guests are staying at the Winnetu.

John Legend, who arrived with his wife Chrissy Teigen on Friday, is set to perform tonight at the mega bash at the Obama’s mansion, sources told The Post.

Nancy Pelosi had ‘other parties’ to attend over Obama’s birthday bash https://t.co/Nr8miXjaer pic.twitter.com/UhWX8ALbFn

Conservative Compares Difference Between How Trump Acts Around Kids vs Biden...Very Telling