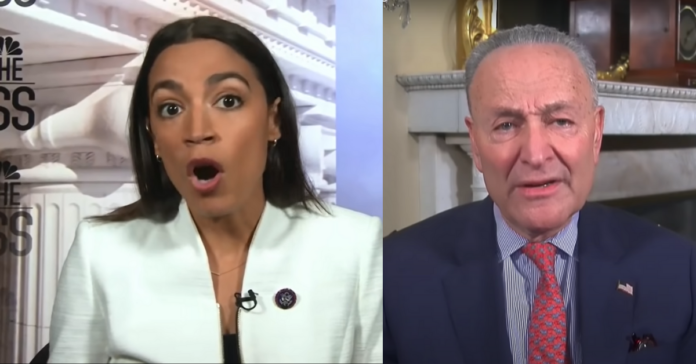 AOC was asked during a recent interview if she will take on Chuck in a primary campaign for his seat and instead of letting Chuck breathe easy,  she did not rule out challenging Schumer. Trump famously told Schumer this was coming.

“And I know there’s a lot of people who do not believe that, but I really, I can’t operate the way that I operate and do the things that I do in politics while trying to be, aspiring to other things or calculating to other things,” she added.

The CNN interview isn’t the first time she’s been asked about a potential challenge to Schumer.

She left the door open when asked by Punchbowl News in January, telling the news organization that she is “very much in a place where I’m trying to decide what is the most effective thing I can do to help our Congress, our [political] process, and our country actually address the issues of climate change, health care, wage inequality, etc.”

“I’m not playing coy or anything like that,” she added.

.@AOC vs. @SenSchumer in a Senate Democratic primary in 2022?
She’s not ruling it out, according to a CNN interview. https://t.co/J498WvurHq

To me this was AOC’s key quote:

“What happens a lot in politics is that people are so motivated to run for certain higher office that they compromise in fighting for people today.”

Right now, no plan to challenge Schumer. That could change, but for now it’s House focus.