Protesters Celebrate July 4th by Dancing on American Flag, Setting It on Fire Outside White House 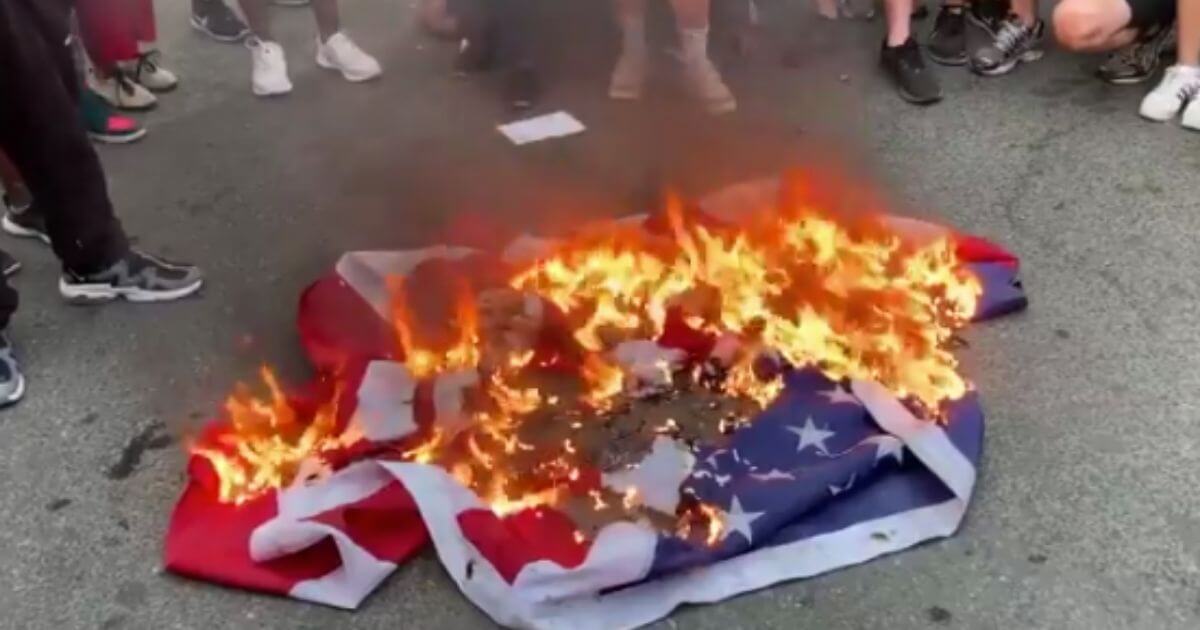 The 2020 event was partially organized by the Revolutionary Communist Party, a decades-old group associated with Gregory “Joey” Johnson. He’s the frequent-flyer protester best known for being the defendant in Texas v. Johnson, the 1989 Supreme Court case in which flag-burning was deemed to be constitutionally protected free speech.

According to The Hill, Refuse Fascism — a group calling for President Donald Trump and Vice President Mike Pence to resign and which held protests across the nation on Independence Day — was also involved in organizing the event.

And, of course, there was plenty of gratuitous flag abuse at the event, held at Black Lives Matter Plaza — the absurd protest zone set up by Washington, D.C., Mayor Muriel Bowser on a street near the White House.

You need to make a tawdry show of it:

Protesters outside the White House are getting ready to burn the American flag: pic.twitter.com/oB7fBbbI9P

Here’s the flag being set aflame, complete with protesters gathering around it as if it were a campfire:

Protesters outside the White House have now set a big American flag on fire while chanting: America was never great! pic.twitter.com/448IPYUR0y

“Be safe, be together, all right,” a bullhorn-wielding man said.

This call-and-response was so original to his ears that he decided he was going to repeat it as the flag burned, with protesters repeating the “America was never great!” chant multiple times.

Here’s Daily Caller reporter Jorge Ventura taking a video of what he identified as Black Lives Matter protesters doing a jig on the flag:

There were clashes with pro-Trump, pro-America protesters, to whom one flag-defiler said: “F— the Fourth of July, f— the American flag.”

You may have noticed the sixth letter of the alphabet figures heavily in the flag-burners’ arguments. There were also clashes with police, which, quelle surprise:

Anti-police protesters continued to shout at cops as fireworks went off in the background: pic.twitter.com/RnH2NdPOuK

After a shouting match with pro-America protesters, the crowd moved onto protesting … the fireworks. Apparently, that was one display of incendiary strength they couldn’t get behind:

As the fireworks show began at the Washington Monument, anti-police protesters gave it middle fingers. pic.twitter.com/euGvdAdl4G

Yes, because the fireworks can see you giving them the finger.

Gregory “Joey” Johnson and his ilk were once the kind of figures whose protests we collectively held our noses at. By in large, conservatives would contend the high court got Texas v. Johnson wrong while liberals would say that, while they agreed the speech was odious, it was still protected as speech.

Today, the Greg Johnsons of the world are normalized. Some liberals shrug off these displays. Others will say we need to listen. There’s even some who’ll defend this — who buy into the idea, currently fashionable, that America was never great, that we were founded in slavery and that we deserve disdain.

The day before, Trump gave a pre-Independence Day speech at Mount Rushmore. Given how it was received by the left and the media — who were in some sort of contest to see which outlet could pack the most uses of the words “dark” and “divisive” in their wrap-ups of the speech — I’m guessing the crowd at Black Lives Matter Plaza wasn’t a fan of it.

Conservatives, however, ought to have paid close attention, because the president noted the existential threat to our republic that could be glimpsed in these flag burnings: “Make no mistake. This left-wing cultural revolution is designed to overthrow the American Revolution,” the president said of our recent crop of far-left protesters.

“In so doing, they would destroy the very civilization that rescued billions from poverty, disease, violence and hunger, and that lifted humanity to new heights of achievement, discovery and progress. To make this possible, they are determined to tear down every statue, symbol and memory of our national heritage.”

And they’ll give July 4 fireworks the finger on their way out.

It would be funny if it weren’t so serious.