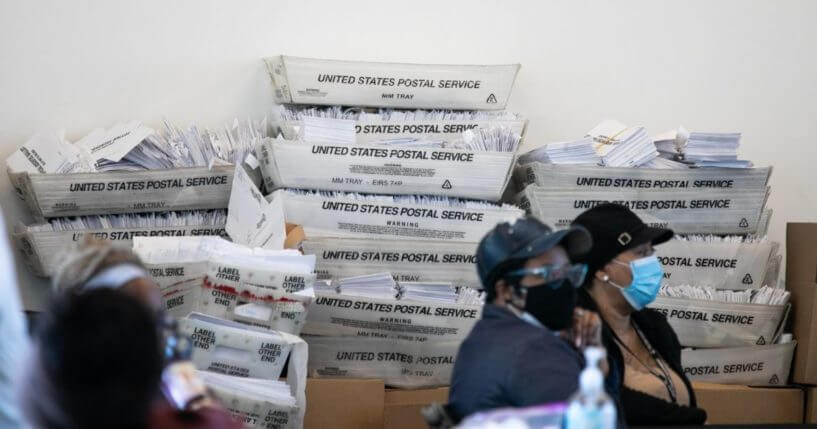 A security alarm inexplicably went off last weekend at a warehouse in Fulton County, Georgia, where 147,000 absentee ballots from the 2020 election are being housed.

The ballots are in the process of being unsealed and examined as part of a judge-approved audit for potential voter fraud.

Fulton County officials confirmed last week that the alarm was “activated” on May 29 but did not say who the culprit was, WXIA-TV in Atlanta reported Tuesday.

Robb Pitts — the Democratic chairman of the Fulton County Board of Commissioners — claimed the room where the ballots are being kept “was never breached or compromised.”

“Pitts said they are still working to learn how the door was opened, why it was opened, and who opened it,” WXIA reported.

“We can confirm that the security alarm was activated at the warehouse on Saturday. The matter is currently under review by FCSO,” the Fulton County Sheriff’s Office said in a statement, according to WGCL-TV.

However, based on the farcical one-sided “investigations” we’ve seen so far, if the culprits had been MAGA hat-wearing Donald Trump supporters, they would probably already have been identified, doxed and imprisoned by now.

Patrick Labat — the Democratic sheriff of Fulton County — said his office was trying to find out what happened.

Like a typical Democrat, Labat overplayed his hand and gave hyperbolic assurances that the ballots were never compromised during the security blunder.

“I am 3,000% confident and understand that the ballots are secure. There is no question about that,” he said, according to The Atlanta Journal-Constitution.

However, speculation and concerns surrounded the alarm incident.

Vernon Jones, a former Democrat who switched parties and is now a Republican candidate for Georgia governor, urged Gov. Brian Kemp to investigate the incident.

“I am calling on Governor Kemp to immediately order an investigation into this matter by the Georgia Bureau of Investigation,” Jones said in a statement, according to The Georgia Star News.

“These ballots must be protected at all times. If the building they are housed in was left unsecured, we need to know how and why it happened! The integrity of our elections is non-negotiable. This situation further underscores the necessity of a forensic audit in our state.”

Last week, former President Donald Trump slammed Georgia Democrats for trying to block the audit of the 147,000 absentee ballots in the state’s most populous county.

Trump said there’s “only one reason” that Democrats are fighting to block the forensic audit.

“That is because they know the vote was corrupt and the audit will show it,” he said.

In a May 31 statement condemning Fulton County’s latest security snafu, Trump said “we must not allow ANYONE to compromise these ballots by leaving the building unsecured, which was done late Friday. Republicans and Patriots must protect this site and the Absentee Ballots.”

The lawsuit to audit the 147,000 absentee ballots was filed by Garland Favorito, a voting integrity advocate with VoterGA.

The lawsuit cited a viral video of suspicious “vote counting” on Election Night as well as sworn statements from witnesses saying they were kicked out of the room beforehand.

And then pull out SUITCASES of ballots.

WHERE IS THE DEPARTMENT OF JUSTICE?”pic.twitter.com/1Nc8cZqGXA

The specter of voter fraud has far-reaching tentacles that won’t go away anytime soon, despite the tyrannical efforts of Big Tech, the Democratic Party and establishment media to silence anyone who questions the dubious outcome of the 2020 election.

The scene at Detroit’s absentee ballot counting center is growing more heated. The windows now being covered up. Allegations of violations. Sec. of State says she welcomes challenges. pic.twitter.com/oUL4A0h3Ku

Until these issues are fully resolved and confidence in the integrity of the election process is restored, there will continue to be suspicion that our votes really don’t matter. This a pathetic reflection on our American “democracy.”