‘Texas Is Going to Start Arresting Everybody Coming Across the Border’ 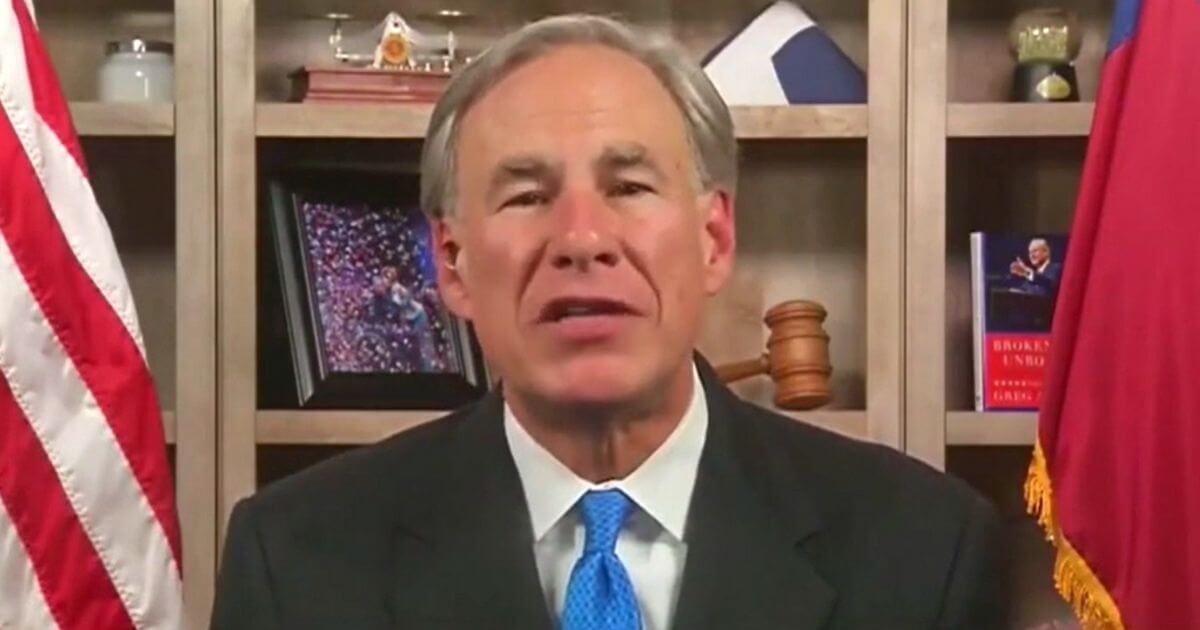 Texas Gov. Greg Abbott has proposed a novel and likely effective solution to remedy the ongoing border crisis: arresting everyone who illegally enters his state.

The news follows Abbott’s disaster declaration on Monday, the text of which established that “the ongoing surge of individuals unlawfully crossing the Texas-Mexico border poses an ongoing and imminent threat of widespread and severe damage, injury, and loss of life and property,” and thus constituted a disaster.

In a clip from a Fox News interview posted on Sean Hannity’s website on Thursday, the Republican governor made it clear that Texas will do everything it can to defend itself from the unprecedented masses of illegal immigrants flooding the border and seeking to take advantage of the Biden administration’s lax policies, including leveraging the disaster declaration to make the necessary arrests of illegal immigrants.

“We’re about to change the way that Texas addresses the challenges along the border,” Abbott said, “and we’re going to start by helping these 34 counties [along the border] respond by increasing arrests. We got a new game in town in the state of Texas that’s going to begin next week.”

“The law that I’m going to use will be legal ways in which Texas is going to start arresting everybody coming across the border,” he said. “Not just arresting them, but because this is now going to be aggravated trespass, they’re going to be spending a half a year in jail if not a year in jail, as well as other actions that I will be announcing next week.”

By utilizing trespassing laws to stem the tide of the disaster, Texas aims to avoid any troubles that previous state immigration laws drew for infringing on the federal government’s right to create naturalization laws, such as happened in the case of Arizona v. United States.

Abbott also shared a clip on Twitter from an interview with Newsmax in which he expanded upon the situation.

Texas has stepped up to do Biden’s job at the border.

Now, TX is about to take action that no state has ever taken to crack down on anybody crossing the border.

“You hear about disaster declarations for hurricanes,” the governor told the outlet. “This is the first time that I’m aware of where I had to declare a disaster for 34 counties along the border because of the crisis because of so many people coming across the border.

“And you have cartels organizing efforts where ranchers’ property and their fences are torn down, their livestock is let out, their homes are damaged, their cars are broken into, their neighborhoods are dangerous, and we are going to instill safety.

“We are going to be doing things in Texas that no state has ever done before when it comes to cracking down on anybody coming across the border. We’re going to step up and secure the border.”

Indeed, Abbott and the good people of Texas have had their work cut out for them with regard to securing the border.

He deployed more than 1,000 public safety officers and National Guardsmen to help combat rampant drug and human trafficking at the border as part of Operation Lone Star earlier in the year, and the Biden administration has essentially abdicated any responsibility for the ongoing crisis.

In response, Abbott has not shied away from making it clear why Texas was left with no choice but to take American border security into its own hands.

“Texas has stepped up to do Biden’s job at the border,” Abbott announced Thursday afternoon on Twitter.

Texas has stepped up to do Biden’s job at the border.

Now, TX is about to take action that no state has ever taken to crack down on anybody crossing the border.

Biden has failed to pursue any meaningful action with regard to the ongoing border crisis.

In point of fact, the president has actively implemented policies that directly put American lives and livelihoods at risk.

Whether it be his reimplementation of catch-and-release, his systematic resettlement of illegals throughout the American heartland or his outright refusal to build a barrier to aid Border Patrol officers in their mission, Biden has made one thing astoundingly clear: He does not care about the border crisis or the Americans hurt most by it.

Given that, is it any wonder that Texas is pursuing the action it is?

Is it any wonder that the state government is stepping in to protect itself and its people from the harm that the Biden administration opened them up to?

Texas is in the right, and every single border state should follow suit. The American people throughout their various states have a right to be secure in their persons and their belongings, and championing a hard-line states-first approach is clearly the only way that such is going to be assured.

Who knows, with the Biden administration completely cut out of the chain of command, something might actually get accomplished.